Book 6 of my Blog Event for the Calladine and Bayliss Series by Helen H Durrant. Each Monday, Wednesday and Friday a book from the series will be featured in sequence. 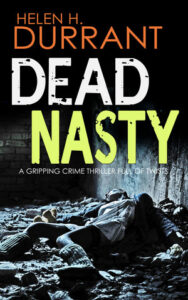 A GIRL’S BODY IS FOUND IN A DUSTBIN. DEAD MEAT IS WRITTEN ON A NOTE FOUND WITH HER.

The girl was part of a group of bullies from the local school. But DI Calladine recognises the MO of Craig Donnelly, a killer he thought he’d put away forever. And coincidentally Donnelly has just been released from prison. But when Detective Calladine charges in, he finds out that Donnelly has a watertight alibi and is under the protection of the local vicar, who thinks Donnelly is a changed man.

When another girl goes missing from the same group of friends, Calladine must look elsewhere for the killer and comes across a sinister online predator who was in touch with all the girls.

DS Ruth Bayliss is back from maternity leave, but even her skills and common sense can’t crack the case. In a race against time, they must stop the killer, someone who may even be close to home, before he continues his vicious killing spree.

Full of twists and turns, this is a crime thriller that will keep you turning the pages until the stunning and surprising conclusion

This is book 6 in the Calladine and Bayliss series.

The body of a teenager is found and the method of murder takes Calladine back to a case from his past.  The murder of Annabelle affected Calladine all those years ago and although the killer was caught and imprisoned he always maintained he was innocent.  However, he has been released on parole and now history is repeating itself.  Was the wrong man imprisoned?  Calladine thinks not but Ruth Bayliss uncovers questions from the earlier case that had no answers forcing Calladine to question is gut instinct.

This case brings both Calladine and Bayliss’ personal lives into their professional ones as they both try to uncover the clues to identify the killer.

I love the characters in this book they develop a little more with each addition to the series as we learn more about the history that has shaped the individual.

This is a fast paced, intriguing story that kept the pages turning on a roller coaster ride of adrenaline pumping suspense all the way to the totally shocking ending.

WOW 5 stars from me – absolutely brilliant