Book 4 of my Blog Event for the Calladine and Bayliss Series by Helen H Durrant. Each Monday, Wednesday and Friday a book from the series will be featured in sequence. 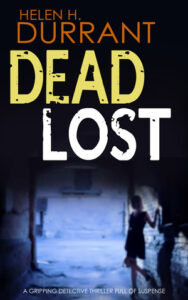 Police partners, D.I. Calladine and D.S. Ruth Bayliss face one of their toughest challenges yet. A group of homeless people have set up camp in the grounds of a disused cotton mill belonging to local businessman Damien Chase.

But one of the men is not what he seems. He has a secret he will do anything to cover up. And once Calladine and Bayliss investigate, they find the crimes go much further than they could have ever imagined.

Will Ruth be able to juggle her personal and professional lives, and can Calladine deal with their new boss, a woman he neither trusts nor likes? Willing to do anything to bring terrible suffering to an end, Calladine make an astonishing move . . .

DEAD LOST is book four of a new series of detective thrillers featuring D.S. Ruth Bayliss and D.I. Tom Calladine. They can be read together or as standalone novels.

Ruth Bayliss is in her mid-thirties, plain-speaking but loyal. Her personal life is about to change forever.

Another great addition to the Detectives Calladine and Bayliss series.

Calladine is struggling personally.  He is trying to find himself after the bombshell his Mum left him.  His is bouncing from one unlikely relationship to another and his Sergeant is heavily pregnant and about to go on Maternity leave.  But things are going to get worse before they get better and to add to the confusion he has to deal with the upcoming court case knowing that there are people out there who will stop at nothing to prevent him giving evidence.

He suspects someone in the force is corrupt but who is it?  Prime suspect is his new DCI.  They get off on the wrong foot and he begins to think she is on a mission to remove him from the team or dismantle the team either way he is very much on his guard.

The story has several strands.  The homeless camp seems to be the central point but a very unlikely one.  When homeless men go missing will anyone care?  Well Calladine and his team do and when their investigations turn up other possible crimes the team are struggling to work out what is going on.

Another gripping story full of twists, turns and red herrings all the way to a totally shocking conclusion.  A 5 star read that will appeal to all crime fiction readers.