Book 2 of my Blog Event for the Calladine and Bayliss Series by Helen H Durrant. Each Monday, Wednesday and Friday a book from the series will be featured in sequence. 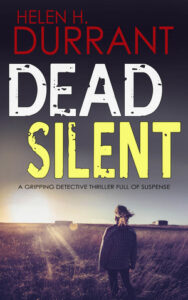 “An edge of your seat detective thriller which had me completely enthralled. Calladine and Bayliss are fascinating police partners. The end was both surprising and uplifting.” Beth Boyd

“A must-read new police procedural that will have you gripped. The characters, setting, and plot are detailed and believable. Can’t wait for the next one.” Sarah Stevens

First a shooting, then a grisly discovery on the common . . .
Police partners, D.I. Calladine and D.S. Ruth Bayliss race against time to track down a killer before the whole area erupts in violence. Their boss thinks it’s all down to drug lord Ray Fallon, but Calladine’s instincts say something far nastier is happening on the Hobfield housing estate.

DISCOVER YOUR NEXT FAVOURITE MYSTERY SERIES BY THE BEST-SELLING AUTHOR  HELEN H. DURRANT

Book 2 in the Calladine and Bayliss series and another brilliant read.

Calladine is suffering.  His mother has died and Lydia has gone the last person he needs to see at his Mother’s funeral is Fallon, his wayward cousin. Then he is called away to a murder.

Someone is targeting American students and who is Vida?  How can these young women go missing and nobody knows or cares?  Except Alice, a student who has been doing a bit of amateur investigation.

This is a totally gripping twisty turny book with plenty going on:  an abducted child, murder of a witness and the dead/missing young women.  Given that Calladine is short a detective and his DCI is ineffectual the team have their work cut out trying to juggle everything so the last thing Calladine is expecting is to have Pandora’s box delivered from the grave.

But this is Calladine and with Ruth Bayliss’ help he will put the pieces together and get the bad guys, all of them.

The characters continue to develop and I felt I got to know Calladine a lot more.  He is a realistic character with flaws and good points and his team all work together really well so it is no surprise that they start to untangle the web of lies and secrets and find the way forward to solve the cases.

Another brilliant read.  I am loving this series.