Book 3 of my Blog Event for the Calladine and Bayliss Series by Helen H Durrant. Each Monday, Wednesday and Friday a book from the series will be featured in sequence. 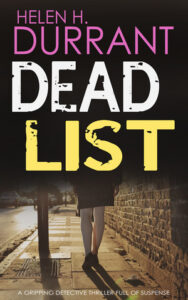 The latest brilliant mystery in the best-selling series, full of twists and turns

“A great read. The murderer is a brilliant creation, shocking but also very human. This is the best book I’ve read by Helen Durrant yet. You won’t be able to put it down.” Emma Brown

An unlikely serial killer with a bucket list of victims . . .
Police partners, D.I. Calladine and D.S. Ruth Bayliss battle a murderer who is working their way through a list of victims. Each murder is meticulously planned and unique, and a tarot card is left at the scene of the crime.

When two children disappear in the local area, the stakes are raised and the team are baffled by the link between the crimes. Calladine and Bayliss race against time to prevent any more carnage.

DEAD LIST is book three of a new series of detective thrillers featuring D.S. Ruth Bayliss and D.I. Tom Calladine. Calladine discovers shocking new information on his complicated family background and Ruth has some surprising news for him. A new detective, Stephen Greco, also come onto the scene, provoking competition with Calladine.

Ruth Bayliss is in her mid-thirties, plain-speaking but loyal. She wishes she had more time for the gym and a love life. She uses her demanding workload as an excuse not to try too hard with the men she meets. Her hobby is birdwatching.

I do like the format of the books in this series so far.  With the Prologue providing you with a taster and the story switching between the police investigation and the mind of the killer.

The characters continue to develop and the events in their personal lives makes them more interesting and realistic.  I won’t say too much about the characters and events as I don’t want to spoil it for anyone.

This book sees the introduction of Greco (he has a series of his own so I wont say much about him at this stage).  When the cases overlap between the different forces Greco and Calladine clash each wanting control of the case/s and Ruth is tasked with trying to persuade Calladine to be less precious which makes for an interesting side story.

The story itself is intriguing and really makes you think outside the box with a very unlikely killer on the loose working through a bucket list.  There is no MO each murder is different and the clues are sparse as the team appear to be fishing in the dark looking for something, anything that could turn into a lead.

Lots of twists and turns and a massive helping of stress for Calladine as he struggles to crack the case before Greco .

Another brilliant addition to a very addictive series.