Today I am kicking off my Blog Event for the Calladine and Bayliss Series by Helen H Durrant. Each Monday, Wednesday and Friday a book from the series will be featured in sequence. 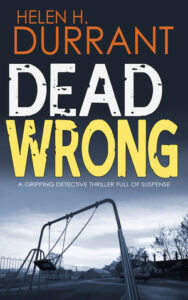 “An edge of your seat detective thriller which had me completely enthralled. Calladine and Bayliss are fascinating police partners. The end was both surprising and uplifting.” Beth Boyd

“A must-read new police procedural that will have you gripped. The characters, setting, and plot are detailed and believable. Can’t wait for the next one.” Sarah Stevens

First a shooting, then a grisly discovery on the common . . .
Police partners, D.I. Calladine and D.S. Ruth Bayliss race against time to track down a killer before the whole area erupts in violence. Their boss thinks it’s all down to drug lord Ray Fallon, but Calladine’s instincts say something far nastier is happening on the Hobfield housing estate.

DISCOVER YOUR NEXT FAVOURITE MYSTERY SERIES BY THE BEST-SELLING AUTHOR  HELEN H. DURRANT

Calladine is DI, married to the job.  His first marriage broke down in the early stages as Rachel couldn’t cope with coming second.  He is now in a relationship with Monika who works at the Care Home where his Mother lives.  However, he isn’t committed to the relationship.  He is a good detective but he always looks for things that don’t appear to be there and his team find this annoying but what is more annoying is that he is usually right.

Ruth Baylis is his Sargant and a dedicated one at that but she is methodical and deals with the facts in front of her.  She is single and happily so and like Calladine is dedicated to her job.

We learn about the characters as part of the story.  It is expertly done.  The characters gain depth and complexity as the investigation unfolds with events prompting the look back into their backgrounds.

The story had me hooked from the prologue.  It starts with school bullies which lead to a boy dying.  The death is decided to be accidental but someone wants the bullies to pay for the part they played.  When the first body parts turn up it has all the markings of a drug war but the reality is much worse.  Who is killing the bullies and why now?

This is a gripping story full of twists and turns but the ending is a shock I never saw coming.  This is a brilliant beginning to a bestselling series.  Helen has set the foundations on which to build the series and I am thrilled to be along for the ride.