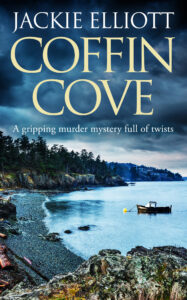 ⭐⭐⭐⭐⭐ “Wow, what a great read this was, gripped me from the first page, loved everything about this story and a great ending.” Tara N.

Andrea “Andi” Silvers needs a fresh start. Once a star reporter, she’s been dumped by her lover and by the paper they both worked at.

Andi moves to the tiny fishing village of Coffin Cove, on the Vancouver coast, where she lands a job at the local Gazette. Expecting bake sales and unpaid parking tickets to be the biggest news items, she quickly discovers the small town holds dark secrets.

Two sea lions wash up on the shore. They’ve been shot dead. Activists point the finger at local fishermen. Then things get far worse . . .

A dead body turns up.

How does it all relate to a fifteen-year-old girl’s tragic death twenty years ago? The girl was found drowned with her arms and legs tied together.

The deeper Andi digs, the more dirt she finds.

WHAT EVERYONE IS SAYING

⭐⭐⭐⭐⭐ “The best crime thriller I have read in a very long time. In fact, as near perfect as any novel in the genre I have ever read. I can’t praise this book enough. It was an absolute pleasure to read. A stunning debut.” Robin

⭐⭐⭐⭐⭐ “I couldn’t put this book down. This story kept me guessing until the end!” Kerry

⭐⭐⭐⭐⭐ “There are many twists to the plot that it is impossible to see where the story is going.” Janet

⭐⭐⭐⭐⭐ “What a debut! It’s hard to believe that this stunning, complicated mystery is a the first in a series.” Kathleen

COFFIN COVE has a horrific cold  murder case of a 15 year old girl. Years later, another heinous incident occurs that could be related to the unspeakable murder of the young girl.

Connecting these two events will bring spine-chilling fear to this small town. Once again there’s a vicious, perilous development with possible links to the new tragedy that will have devastating ill effects on this close knit community.