Hi again.  This is my third and final post on the  3 Book Tour for the latest additions to Tania Crosse’s Devonshire series.  These are Historical Fiction based on Dartmoor, Cornwall and are all stand alone.  Last is THE RAILWAY GIRL.  I hope you enjoy my review.

The Railway Girl by Tania Crosse 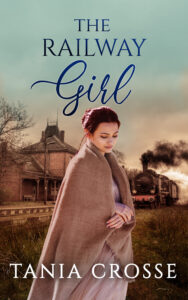 A heart-wrenching story of poverty, grief, love and compassion based around the building of the second railway through the historic market town of Tavistock on the edge of Devon’s Dartmoor.

It is 1887 and times are lean. When West Country farm labourer, Emmanuel Ladycott, and his dairymaid daughter, Tresca, lose their jobs on the land, they head for Tavistock where Emmanuel hopes to join the hundreds of navvies working on the new railway.
Lodging together in a tiny attic room, Tresca is determined to forge a new life among the overcrowding and poverty of Bannawell Street. But when Emmanuel is dismissed from the railway, Tresca doesn’t know whether to blame her father or his Irish foreman, Connor O’Mahoney.
Torn apart by her conflicting emotions, events spiral out of control, leaving Tresca broken and on the brink of despair. Lost and betrayed, will she find the strength and courage to fight for her future?

It is 1887 and Tresca and her Dad have just secured a permanent post on a farm when her Dad’s drinking problem rears its ugly head and the pair are sacked.  The prospects of finding more work locally are non-existant so the pair set off to Tavistock in the hope Emmanual can find work on the Railway.

The work is hard and the pay is poor and Tresca is unable to find work for herself so they rely on her Dad’s pay.  Living squashed in a small room life is hard but Tresca is determined and saving what she can she manages to save what little she can and life goes on.

When tragedy sees her friend moving back to Ireland Tresca manages to rent a better room and buys bits and bobs to make it homely.  Then her Dad gets drunk at work and is fired.  With no income and everything pawned life in the Workhouse looms and what is left of Trescas dignity is stripped from her.

The man she blames for everything going wrong is the foreman Connor.  She wants to hate him he wants to help and eventually a truce is called.  Can Tresca finally be happy it seems so

This is an emotional roller coaster of a book I was feeling sorry for Tresca then for Connor and had to reach for the tissues in several places.  A heartbreakingly good read.