Hi again.  This is my second post on the  3 Book Tour for the latest additions to Tania Crosse’s Devonshire series.  These are Historical Fiction based on Dartmoor, Cornwall and are all stand alone.  2nd up is THE QUARRY GIRL.  I hope you enjoy my review.

The Quarry Girl by Tania Crosse 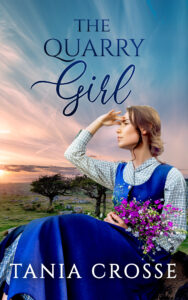 A heart-breaking tale of compassion and conflict set at Dartmoor’s Foggintor Quarry in Victorian times and based around the opening of the Princetown Railway and the Great Blizzard of 1891.

In August 1883, the first steam train on the new Princetown branch line makes its triumphant passage across Dartmoor, passing by the quarrymen’s hamlet at Foggintor. For Ling Southcott and her young sister, Fanny, this is a momentous event, for the railway will connect their isolated neighbourhood to the market town of Tavistock and beyond, making the outside world accessible.
Ling’s future seems ready-mapped, but her sharp, enquiring mind and love of books lead her to higher aspirations. When she is injured in an accident on the railway, she is rescued by a handsome young doctor, Elliott Franfield, and this encounter with a man of education – so different from her dear but unambitious childhood sweetheart, Barney – is to alter the course of her life forever…

It is the 1800s and the Princetown Railway has just been built. Ling is happily ‘walking out’ with Barney who works at the Quarry as do most of the menfolk in their little village.  They don’t have much money but they do have each other.

The whole village turns out to see the arrival of the first train with great excitement but it very nearly ends in tragedy when Ling falls onto the railway line in front of the incoming train.  Her life is saved by Elliott, a trainee doctor and there begins the problems for Ling that will last many years and bring much heartache.

This is a lovely story that really brings to the fore the lives and responsibilities of the people who lived and worked in that period.  Hard working and living hand to mouth but with a determination and values that are rarely seen these days.  The people in those times accept their lot in life and get on with it as best they can and that is what Ling does.  A moment of lust and she is married to Barney but the stranger who saved her life has taken up residence in her heart.

A very emotional and moving story with very realistic characters and very eye opening descriptions of the danger and toil of work in the quarries.

A brilliant read that will appeal to readers of historical fiction.