Good morning.  Today I am opening the 3 Book Tour for the latest additions to Tania Crosse’s Devonshire series.  These are Historical Fiction based on Dartmoor, Cornwall and are all stand alone.  First up is THE GUNPOWDER GIRL I hope you enjoy my review.

The Gunpowder Girl by Tania Crosse 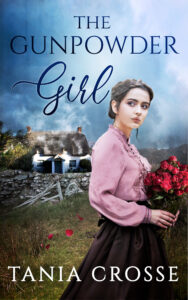 An evocative tale of love and sacrifice set on the wild terrain of Dartmoor in Victorian times, and based on the history of the Cherrybrook Gunpowder Mills and Dartmoor’s infamous prison.

Beautiful, vivacious and compassionate, Rose Maddiford could have any husband she chooses, but she is devoted to only one man, her father, manager of the Cherrybrook Gunpowder Mills high up on the moor.

When an accident tears their world apart, it seems that, despite Rose’s efforts, there is only one way to hold the family together. But it is a solution that requires the greatest sacrifice from Rose. Like a lamb to slaughter, she finds herself trapped in a desperate situation.

Solace comes from the most unlikely source, but what future can there be for two lost souls whose lives have been shattered by the cruel hand of fate?

Rose is a selfless young woman that you can’t help but like and she really grew on me over the course of the book.  Her love of Gospel, her horse is something I can relate to and I loved what the horse brought to the story.

Rose’s Dad has raised Rose from a baby when her mother died helped by Florrie and Rose has a very close relationship with her Dad.  When fate deals a cruel blow their lives are turned upside down.  With no job or home Rose is at her wits end trying to keep her Dad and her horse so when she remembers a rich man wanting her for his wife it seems the answer to all her problems.  However, it turns out to be the beginning of a nightmare as she realises what she has let herself in for.  Charles turns out to be a jealous, possessive and domineering man with a cruel streak but Rose has inherited her Mother’s feistiness….

In addition to the story the author has captured the wild untamed nature of Dartmoor which I really enjoyed reading about.

It all makes for a very gripping pageturner and I loved every page if you like historical fiction you will love this.

Well worth the 5 stars