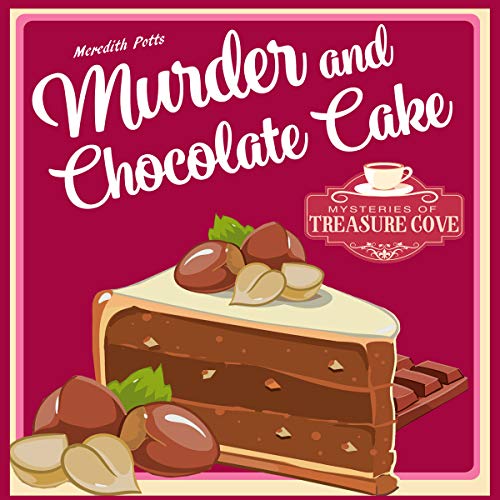 A daring prison escape. A killer on the loose. A quest for revenge. And a dead body.

When convicted murderer Wade Becker breaks out of prison, amateur sleuth Sabrina Carlson finds herself staring down the hardest case of her life. After all, Wade isn’t just any killer. He’s a man who Sabrina put behind bars. So now that Wade is on the loose, Sabrina can’t help but look over her shoulder.

As desperation sets in, Sabrina finds herself asking one question: Will she be able to track Wade down, or will she become his next victim?

This is the second audiobook in the Mysteries of Treasure Cove series. If you like pause-resisting cozy mysteries featuring a picturesque coastal setting, plenty of twists and turns, and a witty sleuth, then this is the audiobook for you.

Buy your copy of Murder and Chocolate Cake right now!

Another Treasure Cove Mystery by Meredith Potts.  This review is for the audiobook version.

This is the third Treasure Cove Mystery I have listened to and at first I found the narrator a little annoying but either she is growing on me or getting better either way I find the short books perfect to accompany me on dog walks and as they are cosy mystery they are a great fit.

Some years ago Sabrina’s sister was murdered it was many years before the murderer was caught and sent to a penitentiary for life.  So it was a big shock to find he had escaped along with another convict known to Sabrina and David.  The couple are used to danger but this time the tables are turned and Sabrina’s life and family are threatened.  No time to lose then the two escapees must be tracked down and put back inside as a matter of urgency.

I am loving getting to know the characters and being part of their normal family life so I am looking forward to more books in this series.

Audiobook Review of Murder and Layer Cake by Meredith Potts