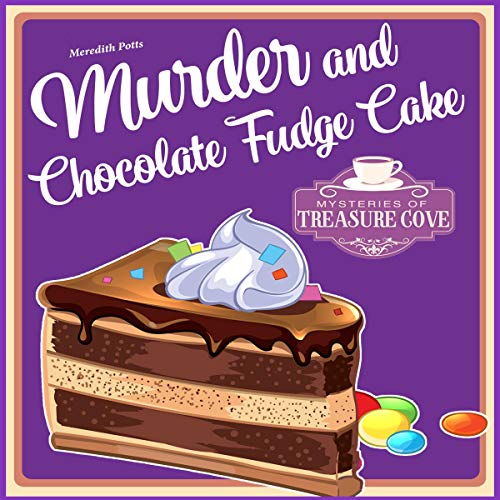 A shocking murder. A friend in need. A dangerous investigation. And cake.

One of Sabrina Carlson’s oldest friends is found murdered. Unfortunately, she doesn’t have time to grieve. After all, the killer is out there somewhere. And she isn’t about to let them get away.

Instead, Sabrina is going to do everything in her power to bring the guilty party to justice – even if it means risking her life. But is she really prepared to discover the truth? Or will this investigation break her?

Find out by buying a copy of Murder and Chocolate Fudge Cake right now! This is the first book in the Mysteries of Treasure Cove series. If you like pause-resisting cozy mysteries featuring a picturesque coastal setting, plenty of twists and turns, and a witty sleuth, then this is the book for you.

This review is for the audiobook version

Sabrina is married to David who is a detective and they have a 10 year old daughter.  Sabrina runs the family coffee shop but also helps with police investigations as a consultant as she has a knack for solving cases.

It is just another day at work when Ryan calls in for his morning expresso but he looks like a man with a lot on his mind.  However, it is the wrong time and place for a chat so he goes off to work.  The following day he doesn’t turn up for his coffee and Sabrina acting on her gut instinct goes to check his home and discovers his dead body.

Then follows the investigation as Sabrina and David start to work their way through the suspects and clues.

This is an intriguing cozy mystery not too long so it is ideal for a listen as you walk book.  From an audiobook perspective I found the ‘he said, she said’ a tad annoying but overall it was a good story and well narrated.