Thank you very much to all the bloggers, reviewers and readers who helped with the launch of HER LOST SISTER.  Your help at such a difficult time is very much appreciated.  You are all awesome xx 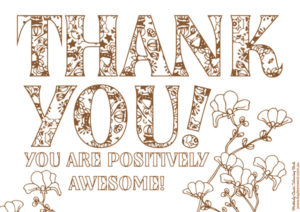 The plot is well crafted, with deftly drawn characters. The mystery starts at the very beginning and remains suspenseful until the very end. Although this is the 7th in the series, this is easily read as a stand alone. I highly recommend picking up the earlier books … Swift is a multi-layered character that is not easily forgotten.

A jam packed story that kept me glued to the book, fast paced and, as always, a great read. Thanks to Joffe books for the ARC in exchange for my honest opinion.

A fabulous crime novel from a very talented writer, Her Lost Sister is a top-notch thriller fans of the genre will not want to miss.

A Brilliant read. Couldn’t put it down. Loved the story and some of the characters. Couldn’t guess who the baddy was.5*.

The writing had depth and built up the suspense with a surety. Suspects were many who wanted the sisters dead, the author’s broad strokes showed the deeper links to them. They were quite complex, and I was left guessing.

The story has enough twists and a couple of red herrings thrown in, which keeps the book interesting and, although the start was a bit slow, the story soon got into the case and had me hooked.

The Word is Out – Alysons Reviews

It’s a great story with loads of red herrings and trails that lead nowhere, and Ty has to run each one to ground doggedly in his search for the truth. Well written, great characters and an ending that surprised me very nicely! 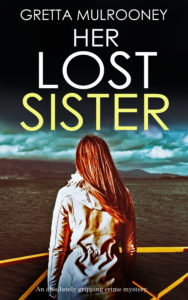 Looking for your next unputdownable mystery? Meet Detective Tyrone Swift. He takes the cases that the police have given up on.

ONE DROWNS, ONE SURVIVES, ONE WANTS JUSTICE

Swift’s investigation starts in London, where Faith and Kelly lived together. Kelly was a recovering alcoholic. It becomes clear that she many potential enemies in London.

The girl whose face she scarred in childhood, the brother and sister she almost killed with a botched gas installation, the brother of her ex-husband, Neil, who was in a deadly car crash after one of their marital tiffs, the husband and son of the woman whose relapse she prompted in rehab, the charity she almost sank . . .

Swift is still juggling his difficult relationships with his girlfriend, Nora, and his ex-wife, Ruth, and trying to find time to spend with his three-year-old daughter Branna.

Can Swift get justice for the surviving sisters? DISCOVER THE TRUTH in this crime thriller full of twists and turns.

HER LOST SISTER is a seamlessly crafted mystery that will have you gripped from start to pulsating finish.

What readers are saying about GRETTA MULROONEY

“I really love this series.” Hannelore

I do love the Tyrone Swift series it is different in that it is a PI solving the cases that the police couldn’t and because he is a PI he doesn’t have access to the information the Police do and therefore has to resort to good old fashioned detective work talking to people and trawling through the information he does have.  They make for a very intriguing read and Her Lost Sister is another brilliant addition to the series.

Two sisters on a ferry one stormy night.  One is found drowned the other with a debilitating brain injury.  Because they are relatives of Tyrone he agrees to investigate and find out what happened.  The investigation takes him on a twisty turny journey through the life of Kelly, a recovering alcoholic who left behind her several people with very good reason to want her to come to harm but is that enough for them to kill?

Several possible attackers and only 2 people know the truth one is dead and the other has amnesia.  Tyrone has his work cut out.  To add to his troubles he has his daughter to take into account and the ongoing situation with Oliver plus a very stormy relationship with Nora.

A lot going on and even more to keep the pages turning.  This is a brilliant read that will appeal to all readers of Crime Fiction.

Tyrone Swift is an ex-police detective who now works privately. He’s survived a stabbing and his fiancée running off with another man. Swift’s personal life is complicated, to say the least.

Gretta Mulrooney is a critically acclaimed author of best-selling fiction.

‘Mulrooney has a real gift for dialogue, the words and phrases ring true and make her characters wonderfully real . . . A tenderly funny and genuinely moving piece. I loved it.’ Fiona Morrow, Time Out (about ARABY) 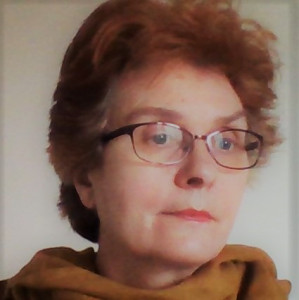 I was born and educated in London, of Irish parents. I studied for a degree in English Literature at the University of Ulster, Magee college in Derry. I have worked in education and social care.

I started writing in my thirties and I published four books for children and teenagers with Poolbeg Press, Dublin; A Can of Worms, A Nest of Vipers, A Den of Thieves and I Love You-Te Quiero. These books are available on Amazon.

Araby and Marble Heart were published by Harper Collins to critical acclaim. They have been translated into Dutch and Spanish.  These books are available on Amazon. They are being reissued in May 2016 by Fourth Estate as Kindle and paperbacks.

Fire and Ice, Out of The Blue and The Apple of Her Eye were published by Robert Hale. These books are available on Amazon.

Out of The Blue was published by Joffe Books as an e book and paperback in February 2016 and is available on Amazon.

Lost Child was published by Joffe Books as an e book and paperback in March 2016 and is available on Amazon. (This was previously published as Fire and Ice by Robert Hale.)

Coming of Age was published by Joffe Books as a e book and paperback in April 2016 and is available on Amazon. (This was previously published as The Apple of Her Eye by Robert Hale.)

I have always been an avid reader of crime fiction and psychological thrillers. I have started a series of crime novels featuring charismatic private detective Tyrone Swift.

The Lady Vanished was published as an e book and paperback by Joffe Books in December 2015 and is available on Amazon.

Blood Secrets, the second novel featuring private detective Tyrone Swift, was published as e book and paperback in spring 2016 and is available on Amazon.

Two Lovers, Six Deaths, the third Tyrone Swift novel, was published as an e book and paperback in December 2016 by Joffe Books and is available on Amazon.

Watching You, the fourth Tyrone Swift novel, was published as an e book and paperback in June 2017 by Joffe Books and is available on Amazon.

Low Lake, the fifth Tyrone Swift novel, was published as an e book and paperback in March 2018 by Joffe Books and is available on Amazon.

Bound By Lies is a boxset trilogy of the first three  novels in the Tyrone Swift series. It was published as an e book and paperback in June 2017 by Joffe Books and is available on Amazon.