Today I am thrilled to be hosting a Guest Review by Lena as part of the Blog Tour for Murder in the Gallowgate by Daniel Sellers.  This is a brilliant police procedural that will appeal to anyone who loves crime fiction.

MURDER IN THE GALLOWGATE 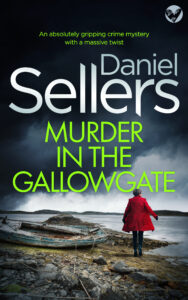 Detective Lola Harris returns from a miserable solo holiday — an effort to get over her useless ex — only to find herself in charge of a high-stakes investigation.

She rushes to a crime scene in the historic Gallowgate neighbourhood. The smell in the basement is thick and sweet, even through Lola’s forensic mask.

The old wooden chair and the rope hanging from its arms are stained red. The earth below is saturated with blood. Six candleholders, their lights burned out, lend the scene an air of a completed ritual.

And yet there is no sign of a body.

A smashed-up phone in the corner puts the investigators on the trail of a local politician who has vanished without trace and a controversial artist who died thirty years ago on a remote Hebridean island.

Lola will have to work with the most obnoxious detective in Glasgow if she’s going to stop the killer from striking again.

MEET THE DETECTIVES
Lola Harris, a former hairdresser, is able to get people to trust her at their most vulnerable. She can pierce the toughest facade, asking questions that get to the heart of the matter. But she knows she can play it “mumsy” when she needs to. She drinks too much coffee, and likes a Bacardi and Coke, though she tries not to drink because it makes her maudlin about her useless ex, Joe.

Lola’s main rival in the force is Detective Sergeant Aidan Pierce, who seems hell-bent on sabotaging the case — and her career with it. He thinks he’s the next big thing, and is intensely frustrated that she got ‘his’ promotion. Carefully dressed in expensive Italian suits, he’s a snob, very good looking and vain with it. He’s his own worst enemy, and his manipulative and toxic behaviour has been getting worse. At some point, Lola will have to confront him.

Luckily, Lola has Detective Constable Kirstie Campbell to back her up. Kirstie is committed, focused (too focused?) and feels most secure when playing things by the book.

THE SETTING
Glasgow is a city of many different faces, from gritty and unsettling, to modern and slick. It rains a lot: clouds make a lid over the city, and citizens hunch as they hurry about their business. Still, people are very friendly and like a good time.

MURDER IN THE GALLOWGATE Drops us into a terrifying horrific scenario, leaving a baffling mystery behind. Subsequently there’s a gruesome discovery that implies historic connections. The complex, mind-boggling conundrum Is riveting sending the pages flying by. A shocking event explodes the suspense, leading to a conclusion you’ll never see coming.

Daniel Sellers grew up in Yorkshire. He has lived and worked in Liverpool, Glasgow, Dublin, and Vaasa in Finland. He now lives in Argyll with his partner and a wheaten terrier called Rasmus.

Daniel loves crime fiction, old and new, particularly the work of Margaret Murphy, Mo Hayder, Ruth Rendell, P D James and Josephine Tey. He is a huge (if not obsessive!) fan of Agatha Christie, collecting first editions and managing the “For the Love of Agatha” Twitter fan account (@FortheLoveofAg1).

Daniel’s detective thrillers are pacy and dark, with as much interest in whydunnit as who.