Today I am hosting a #Guestreview of MURDER AT SUGAR RUSH BEACH by Paula Lennon as part of the Blog Tour.  This is book 3 in the Detectives Preddy & Harris series. 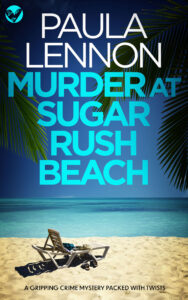 A TOTALLY UNPUTDOWNABLE CRIME MYSTERY FILLED WITH TWISTS BY A BESTSELLING AUTHOR.

SERIES SELECTED FOR THE TIMES AND SUNDAY TIMES CRIME CLUB.

Detective Preddy hoped for a quiet start to the new year. But there’s a murder at Sugar Rush Beach. A man is stabbed through the heart with an antique awl.

The victim, Jerome Baccus, was the nephew of a local developer who wanted to transform this quiet beach into a high-end tourist complex. Now he’s dead.

Everything points to a rival developer. But Preddy realizes other people might have wanted to kill Jerome:

His two girlfriends.
The Sugar Rush beach vendors.
The sugar daddy of one girlfriend.

Meanwhile, Preddy must work with Scottish detective Sean Harris. And Preddy knows that Harris is conducting a covert internal investigation.

When a woman is found dead, the stakes are raised. And everyone’s career is on the line.

WHAT READERS ARE SAYING ABOUT MURDER AT SUGAR RUSH BEACH:

⭐⭐⭐⭐ “A credible and well-drawn cast adds to this enjoyable mystery with a wonderful and well-defined sense of place.” Ruth G.

⭐⭐⭐⭐ “This was a fun and enlightening read, with lots of details about life in Jamaica, with colorful characters and a wonderful sense of place.” Hannelore C.

⭐⭐⭐⭐ “Filled with great characters, twists and a steady pace. I was hooked from the first chapter. The plotline held my attention throughout.” Louise W.

⭐⭐⭐⭐ “This was a gripping read that was engaging all the way through, it was well written with good character development and a good plot line. It was also informative and I learnt so much about Jamaica which I loved.” Aria H.

⭐⭐⭐⭐ “I thoroughly enjoyed Murder at Sugar Rush Beach . . . I was glued to the pages with all the surprises the author throws in.” Elaine T.

MEET THE DETECTIVES:
Raythan Preddy is a tough-talking, patriotic Jamaican detective and leader of the Pelican Walk Major Crimes Team. Determined to halt the murder rate in Montego Bay despite limited resources and a hostile top brass, Preddy gets the additional help in the form of newly-arrived foreigner, Sean Harris. But the jury is out on whether the new guy is going to be any good. Or whether the locals will understand his broad Glaswegian brogue.

Sean Harris is an outspoken, red-headed Scottish detective with a stubborn streak. In his fifties, with nearly two decades in law enforcement, he’s been sent on secondment to Jamaica. While sympathetic to the cause of crime reduction, Harris is frustrated by the Jamaican methods of policing and not shy with his opinions. Much to the chagrin of his new colleagues.

MURDER AT SUGAR RUSH BEACH opens with a tragic vicious act. A mysterious, horrific development in the situation has tensions running high. Every riveting chapter increases the tangled web of mystery. As the pages fly by new information sets in motion an action packed conclusion you’ll never see coming. 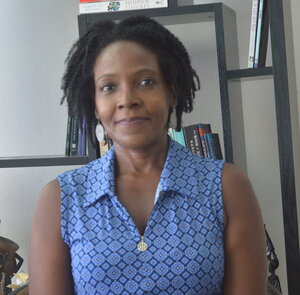 Paula Lennon is the sixth and last child, and only girl, born to Jamaican parents in the West Midlands. Paula lived in Jamaica, West Indies, during her teens and attended Clarendon College high school in Chapelton before returning to England.

She was once a London commercial lawyer until she saw sense and returned to live where the weather was more conducive to smiling. The island of Jamaica is a constant source of inspiration for Paula and the backdrop to her crime books which are set in the city of Montego Bay.