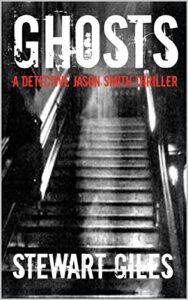 Police officers are being killed in York. The murders are cold, calculated and methodical. This killer leaves nothing behind except a sense of dread.

When someone Detective Jason Smith has worked with ends up dead it becomes personal, but this phantom leaves nothing to even hint at why this is happening.

The only breakthrough in the case comes from several witnesses who claim to have seen a ghost-like figure around the time of the murders.

Facing ghosts of his own, and on the brink of a breakdown Smith is pushed even further over the edge when he discovers the sick reality behind these murders.

This isn’t about murder – this is about something else altogether.

These ghosts will haunt Jason Smith for the rest of his life.

What readers are saying about GHOSTS

A thrilling story yet again, well worth waiting for. Rather than a complicated plot with lots of clues, it’s a fast-paced psychological puzzle which centres around Smith, his wife and their police colleagues. – Carol

Riveting, skyrocketing action and suspense lead to a dynamite conclusion impossible to see coming. GHOSTS is a one sitting read. – Eileen

A very intriguing story that keeps the mind spinning all the way through. The ending came as a complete curve ball. A brilliant read with characters that fit the plot perfectly – Reading Addict

The Detective Jason Smith series continues to grow with book 17 now available. In addition I have an new series featuring an Irish detective who relocated to Guernsey. The first 5 books in the Detective Liam O’Reilly series are now available. There are also 2 stand alone novels with another on the way.