Congratulations to Chris Collett on the publication of MIDNIGHT LIES.  This is book 9 in the brilliant Detective Mariner series and is available on Amazon now for just 99p/99c 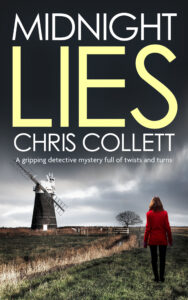 Discover an utterly addictive new crime mystery from a No. 1 bestselling author.

It starts on an abandoned campsite in Norfolk.

Developers unearth a human skeleton. The remains of an eighteen-year-old girl.

Robina Scanlon — a blast from the past that shocks Detective Tom Mariner to his core.

In the sweltering summer of 1976, the teenage Mariner fell for Robina instantly.

He thought she was the one who got away. Now he realizes she never even left.

She was murdered back at the campsite where they met, all those years ago.

Mariner drives to Norfolk, his head so full of ghosts he can barely think straight.

What happened to his holiday romance?

The mystery of her death becomes a dangerous obsession. Distracting him from a perplexing murder case on his home turf of Birmingham.

As midnight approaches, someone out there will do anything to keep the past buried . . .

A nail-bitingly tense crime mystery with a stunning climax that will keep you turning the pages into the midnight hour. Perfect for fans of Peter James, Angela Marsons, Rachel McLean, Caro Ramsay, Helen H. Durrant, Ian Rankin and Peter Robinson.

WHAT EVERYONE IS SAYING ABOUT MIDNIGHT LIES:

⭐⭐⭐⭐⭐ “A gripping story which kept me guessing until the end. Would recommend this book to anyone who likes a good thriller.” Barbara

⭐⭐⭐⭐⭐ “Wow! What a brilliant book, so many stories woven into it but not once was I confused with the characters. Very cleverly written.” Janet

⭐⭐⭐⭐⭐ “I thoroughly enjoyed this book, and think it was one of Chris’s best yet.” Carole 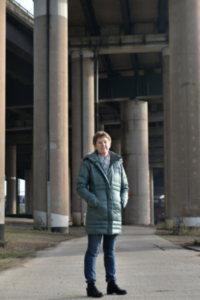