Today I am sharing my review of HUSTLE by Owen Mullen.  This is book 3 in the bestselling Glass Family series and it is an absolutely stunning read that had me turning page after page all the way to the end. 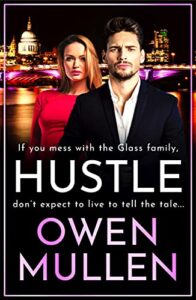 If you mess with the Glass family, don’t expect to live to tell the tale…

What was meant to be a straightforward jewellery heist goes horribly wrong, and the thieves are forced to take a hostage to make their escape. But when they discover their prisoner is the infamous Nina Glass – one of the bosses of the most dangerous criminal dynasty in London – they soon realise they have made a terrible mistake.

Greed wins out over good sense and the gang decide to make the best of a bad situation. They send Luke Glass a ransom note. But messing with London’s top crime dynasty is a serious error. Now Luke must track down the gang who abducted his sister before they carry out their brutal threats.

The Glass family have other problems. The crooked cop they have on their payroll – DCI Oliver Stanford – makes an unwelcome discovery. The insider they had all presumed dead, may in fact have survived, and still be feeding information to the police.

Under attack from all sides, and desperate to save his sister, Luke has the reputation and survival of the crime dynasty in his hands – is this the end of the Glass family?

Pacey, explosive and unforgettable, The Hustle is perfect for fans of Martina Cole, Kimberley Chambers and Mandasue Heller.

What readers say about Owen Mullen:

‘One of the very best thriller writers I have ever read.’

‘Owen Mullen writes a good story, he really brings his characters to life and the endings are hard to guess and never what you expected.’

The Glass Family are back in this 3rd addition to the series.  The books would work well as stand alone but more enjoyable if you have read the previous books to get the background to this uniquely brilliant gangland family.

Following the ‘disappearance’ of his big brother Danny, Luke Glass has control of the London underworld but the whole family is aware there is always someone who thinks they have what it takes to get one up on the Glass Family.

A straight forward Jewellery heist, carried out by some privileged youngsters looking for excitement, goes horribly wrong – or horribly right – and they find themselves not only with a haul of priceless gems but also a hostage, not any hostage, their hostage turns out to be Nina Glass, sister of the head of London’s crime dynasty.

Finding out where Nina has disappeared to on top of other problems including a tame copper who is turning out to being not so tame and the possibility of  an insider they thought was dead but is still very much alive.  Problems are hitting the Glass Family on all sides.  Can Luke hold it together and keep his family and organisation safe?  Well you will have to read the book to find out.

The characters continue to develop in realism and uniqueness with such skill that you almost find yourself liking the bad guys as well as the good (but are they good?).

This is another action packed, adrenaline pumping read that I was unable to put down.  So many secrets, lies, and hatred intermingled with drugs and gangland thugs  which makes this an absolutely phenomenal read that is not for the faint hearted.  Definitely 5 stars from me. 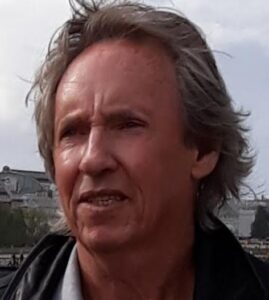 Owen Mullen is a highly regarded crime author who splits his time between Scotland and the island of Crete.  In his earlier life he lived in London and worked as a musician and session singer. He has now written seven books and his first gangland thriller for Boldwood.

A note from Owen
My story so far… After some success with bands in Scotland, I moved to London – full of dreams – and worked as a rock musician, session singer and songwriter. Apart from a hit record in Japan with a band I won’t name here, and several shots on goal which hit the bar, it was obvious – to me at least- that it was time to head home and see what direction my next adventure would take me in.
That change came in the form of my wonderful wife Christine; she inspired me then and still does.
Settling down to a new life was more challenging than I’d expected, so I went back to the start and became an education junkie – making up for the time lost in pursuit of stardom. Eventually, I had my own design and marketing company and life was good.
Our passion for travel took us to many amazing places from the Amazon and Africa to the colourful continent of India and Nepal, with too many stops to mention in between.
Writing didn’t show up until we built a villa in the Greek Islands and time weighed heavily on me. It wasn’t long before I realised this was the path I’d been meant to find. Now, we split time between our sunny Cretan home where I write all of my novels, and Scotland, with its raw energy and colourful characters around every corner.