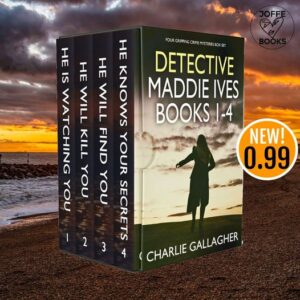 ⭐⭐⭐⭐⭐ “Charlie Gallagher has surpassed himself with this novel. Exciting and absorbing from the start . . . Absolutely loved every minute of this book.” G.L. Clay

⭐⭐⭐⭐⭐ “Blimey, Charlie, you know how to get the blood pumping!! What a fantastic book, from the first sentence to the last, hooked all the way!” Tracy

⭐⭐⭐⭐⭐ “Wow, this was an amazing read . . . I could not put it down. So much action and suspense going on. Wonderful well-written plot that had me hooked from the start.” bwichkan

IN THIS FOUR-BOOK BOX SET:

BOOK 1: HE IS WATCHING YOU
A young woman’s body is left in a metal container in a remote location. The killer is careful to position her under a camera that links to his smartphone. He likes to look back at his work. He is watching her. But she isn’t dead. So he will return to finish the job. Detective Maddie Ives and DI Harry Blaker must work fast. Time is running out for the woman in the container. And the killer has already identified his next target.

BOOK 2: HE WILL KILL YOU
Grace Hughes is kicked to the bathroom floor by her partner. Fighting to regain her breath, she can no longer ignore a simple truth: she must leave or he will kill her. Grace has a plan to get free. And Detective Sergeant Maddie Ives is going to help her. But Maddie has a lot on her mind. A dead boy in a bath, a car bomber who wants to make a statement, and the return of a scarred DI Harry Blaker. Can he and Maddie stop the bomber, find a killer and save Grace — whether she helps herself or not?

BOOK 3: HE WILL FIND YOU
A ten-year-old-boy steps out in front of traffic. He is dazed, confused and barefoot. He is covered in blood. It’s not his. Detective Maddie Ives is called out and finds the boy backed up against a shop front. He’s ready to run again. He can’t tell her why. Then a man is found brutally murdered and Maddie and Detective Harry Blaker are determined to find out who is pulling the strings. If they don’t stop him, he will find more victims. And the evil will come close to home.

BOOK 4: HE KNOWS YOUR SECRETS
Holly Maguire takes a taxi to a clifftop location and the car goes over the edge of the cliff. As Holly falls to her death, she tightens her grip on a rucksack. She will give her life to bring him down. Kelly Dale receives a text from Holly, sent just before the accident, and rushes to the clifftop. She is too late. Detective Maddie Ives must stop a powerful man who exploits and controls women before it’s too late.

Don’t miss out on this acclaimed series of unputdownable crime mysteries! YOU GET ALL FOUR OF THE ABOVE BOOKS IN THIS EDITION.

THE DETECTIVE
Detective Sergeant Maddie Ives was destined for the top. Plucked from the police training college before ever making the street, she was thrust into the world of undercover policing that forces a young woman to survive on her wits. It worked, Maddie seemed to find her place. But a simple mistake saw her once again wrenched out of her comfort zone. From a broken family, now with a broken career — both of which have played their part in conditioning her never to let anyone too close — Maddie finds herself investigating a murder in a new county and in a team full of strangers, hoping her passion for the truth and protecting the vulnerable will be enough.

HE IS WATCHING YOU

Hello Maddie Ives – kicked out of a job she loves and transferred to the back of beyond.  She doesn’t want to be there and they certainly don’t want a loose cannon in their midst.  Harry, however, can see something others can’t in the feisty female and sticks his neck out to stop her packing up and leaving.

The story itself takes over the book rather than the characters it is unusual, fast-paced and I was turning pages unable to put it down.  It was engrossing to watch the character of Maddie evolve to become part of a partnership that I am sure will continue for many books to come. A totally different kettle of fish to the George books so there is no mileage in comparing the two.  Maddie and Harry grow on you so keep an open mind and the story takes hold of you and transports you to a world of crime and policework never seen before in a book.

HE WILL KILL YOU

A traffic jam in a tunnel and cars exploding and the story begins. It took me a while to work out what the bombs had to do with domestic abuse and what the woman and child had to do with anything but come together it did. Parts made for difficult reading but this stuff does go on every day somewhere so I read on. Got to love Maddie Ives she is a feisty character but one I definitely want in my corner in times of trouble.  This book humanised  her as we had an insight into her romantic side.  She and Harry are opposites working to the same standards and objectives they make a brilliant team and I can see how that is going to make this series going forwards. The story is fast paced with plenty of grit and is unusual as the lines between victim and murderer become blurred.

HE WILL FIND YOU

The adrenaline starts pumping at the beginning when a child covered in blood walks in front of a car.  Quite where this fits into the story isn’t clear until much later on. Harry is dealing with some personal issues that give the reader a lot more insight into the character.  The fatal accident that cost his wife her life comes back to haunt him and sees Harry struggling between right and wrong especially when his daughter’s mental health is thrown into the mix. Then there is the story which is complicated and it is this complexity that causes so many problems for the investigation.  No clues and something dark and evil is going on.  Can Maddie and Harry get a handle on what is actually going on before more people die? This is an intriguing book that keeps the reader turning pages as we join Maddie and Harry in trying to work out what is going on, who is behind it and why

HE KNOWS YOUR SECRETS

A taxi goes over a cliff killing the taxi driver and a prostitute who is known to the Police.  Maddie attends and her gut instinct is telling her there is something wrong.  There are several very probable theories about what happened: a sex act gone wrong, murder/suicide ….. But Maddie is not buying any of them. When her boss, Harry tells her to leave it and concentrate on the cases she already has, she uses her own time to continue investigating, determined to put the pieces together and find out what Holly wanted her to know. The story develops and we see the police view and the view from the criminal side as we are immersed in the sickening and violent world of abuse and exploitation masterminded by a known criminal that keeps escaping justice. This is a fast paced story but we really get into the detective side as we follow Maddie as she tries to join up the dots and help people that don’t want to be helped. I do love this series and in this one Maddie takes more of a central role with Harry taking a back seat for once.  As always the banter between Maddie and Vince adds humour to offset the darkness that shrouds Major Crimes.