Today I am hosting a guest review by Lena as part of the Blog Tour for a new release to the DI Jack Dawes series by Frances Lloyd.  THE VALE VINEYARD KILLER is book 8 in the series but they do work well as stand alone.  This is a must read for all Crime Fiction fans. 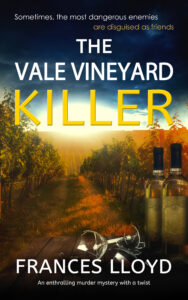 AN ENTHRALLING MURDER MYSTERY WITH A SHOCKING TWIST FROM A BESTSELLING AUTHOR.

The usual tour at Richington Vale vineyard is disrupted by a nasty discovery. The lifeless corpse of Bob Beacham, the site manager, is found stuffed into a huge fermentation tank. He suffocated to death.

It looks like a tragic accident. Until the paramedics find a deep gash on the back of his head, that is. It’s time to call in Detective Jack Dawes.

Then Doctor Anstruther, who looks after the health of the vineyard workers, is knocked down in a hit-and-run.

It all seems like a coincidence too far, but someone is clearly picking off members of the tight-knit community of Richington Vale. But who? And why?

DETECTIVE JACK DAWES MUST STOP THIS KILLER BEFORE THE BODY COUNT RISES AGAIN.

WHAT READERS ARE SAYING ABOUT FRANCES LLOYD:

“There are some unexpected twists in the plot and a few laughs along the way and the reader is kept guessing until all is revealed in the end.” Annie

“A great book that you won’t want to put down.” Alan

“This murder mystery is a real page turner, I was hooked from start to finish.” Angela

MEET THE DETECTIVE
Detective Inspector Jack Dawes, tall and handsome, looks like the fuzz even when he’s off-duty. He rose up through the ranks at Scotland Yard and now is a well-respected detective in the murder squad. A career copper, he was married to the job until he met Coriander during a money laundering investigation, the case which earned him his promotion to DI. He has logical analytical skills. She has intuitive people skills. So he bounces ideas off her. They make a formidable and funny couple whose skills combine to solve crimes.

THE VALE VINEYARD KILLER presents with an historic tragedy. In the present a reprehensible act takes place. Shortly thereafter, a heinous incident occurs followed by a horrific discovery. Later another ghastly event happens. What, if anything, connects all these situations? All hell breaks loose exploding into bewildering mysteries and spine-tingling trepidation. Subsequently, perplexing conundrums and high pressure suspense leads to a dynamite finish you’ll never see coming. 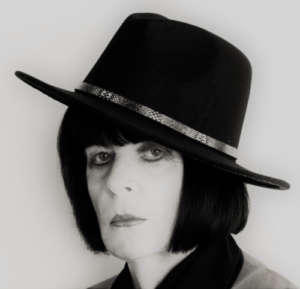 Frances Lloyd was born in Essex but now lives in the Scottish Highlands. She was educated in Cheltenham where she studied English and Classics.

Frances has always been a writer. The day job was in government communications. She has also worked as a freelance journalist and photographer, and began by writing short stories, but her ambition was always to write murder mysteries. She now writes full time and has published six crime novels.