Today I am sharing my review of SMALL BONES as part of the Blog Tour.  This is book 2 in the Detectives Harvey & Birch series written by Kerry Buchanan.  Although book 2 in a series they do work perfectly as stand-alone 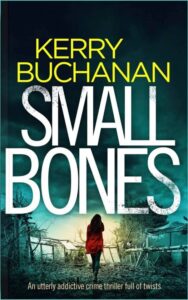 Sue Hearn is planting a herb garden on the site of her grandfather’s old greenhouse. She’s spent the morning digging up all sorts of odds and ends already. But she doesn’t expect this grisly find.

Could it be the remains of her mother, Monica, who went missing thirty years ago?

Sue’s father, in hospital with dementia, insinuates that a police officer was involved in her mother’s disappearance. But can he be trusted?

So now Detectives Asha Harvey and Aaron Birch might be looking for a bent copper.

As they dig deeper into the past, Sue and Asha find secrets so dangerous it will put all their lives in danger.

MEET THE DETECTIVES
DETECTIVE ASHA HARVEY
Asha Harvey has always had a powerful sense of right and wrong. She has wanted to be a detective since she was a child, and while she can be a little too trusting, her open manner makes people want to confide in her. She is especially driven to succeed as a woman of colour in a largely white, male police force in Northern Ireland. Her family support her and are ridiculously proud of her, which adds to her internal pressure to succeed.

DETECTIVE AARON BIRCH
Boyish and gangly, Aaron Birch entered the police force as a detective through a graduate recruitment scheme. This makes him the butt of snide remarks by fellow officers, so he always feels he has something to prove. He also has a tendency to stretch the rules to suit himself, which can lead to him getting into trouble.

THE SETTING
A city of contrasts, Belfast is filled with beautiful old relics dating back to a golden age of shipbuilding and wealth, as well as the scars of more recent wounds. The city has an exciting sense of newness and potential, but it can’t quite shed those who lurk in the darker shadows born of its turbulent past.

WHAT EVERYONE IS SAYING ABOUT SMALL BONES:

⭐⭐⭐⭐⭐ “This is the second outing for Detectives Harvey and Birch and is even better than the first one . . . This book had me gripped from the beginning and I am already hoping there is another book to come in the series.” Barbara

⭐⭐⭐⭐⭐ “Wow after enjoying book one I was eager to get into this book and the author never let me down. Love these characters and I hope we get many more in the series to come. This book is full of twists and turns all the way.” Booklover Bev

⭐⭐⭐⭐ “This book was a very fast-paced and easy to read, I read it in one setting . . . The narrative was good, the characters were well-written and likeable . . . I found it hard to put this down and even read whilst I was eating. It had a suspenseful and mysterious build up that kept me on my toes.” Kirsty

“The plot keeps you on your toes and there is never a dull moment throughout the book . . . The cliffhanger left me wanting more.” Meg

I loved book 1 in this series (Knife Edge) so I was very much looking forward to book 2.  They do work perfectly as stand-alone and Kerry has made sure there are no spoilers or big chunks of text referring to the first book which made it all the more enjoyable.

The characters continue to develop and I love the way Kerry has woven into the story the challenges facing a coloured woman in overcoming the challenges of the Police Force where the white male dominance is very ingrained.

Sue brings a different character to the story and I would like to see her appear in future books.

Sue is removing the flagstones after the greenhouse collapsed and she found something she really wasn’t expecting.  Having worked in the area before she knew a child’s bone when she saw one.  What follows is a very intriguing complex case that delves into live more than 3 decades ago and brings to light actions that make Asha and Arron wondering who they can trust.

Abduction, attempted murder, bullying, corruption, lies and revenge all play a part in this totally gripping thriller that will have you turning page after page all the way to the jaw-dropping ending.

Another brilliant read from a very talented author 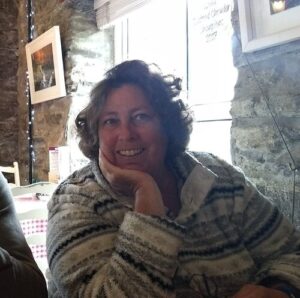 Kerry Buchanan has had numerous short stories published internationally, including some prize-winners, but her heart lies with novel-writing. Her crime series is set in Belfast and in the rolling County Down hills she sees from her window as she writes. She is often invited to perform her work at literary events or to be a member of panels at conventions, and she loves to help new writers by facilitating writing groups and classes in her local community.

Although Kerry is disabled, her hobbies include sailing and attempting to outwit the slugs in her vegetable patch. Generally, the slugs win.