It is my turn on the Blog Tour for this gripping thriller. 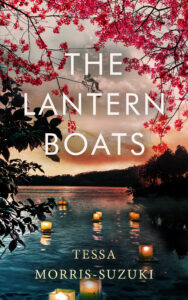 A WEB OF ESPIONAGE AND BETRAYAL IN OCCUPIED JAPAN DRAWS IN TIGHT.

Elly Ruskin is still struggling to settle. Half-Japanese by heritage, Elly was repatriated to Japan after the war, but Tokyo is a city she barely knows. And now she’s certain her new husband is having an affair with the enigmatic Japanese poet known as Vida Vidanto.

Yet Elly is not the only one suspicious of Vida.

The occupying American forces have their eye on her too. Kamiya Jun has been recruited to spy on the poet and find out why Vida spent her war years in China. He is perfect for the part. A war orphan, he has honed the art of becoming invisible in order to survive. But following Vida leads Jun to the Ruskins. And he soon finds himself delving into their private lives as well.

Then Vida Vidanto is found murdered in her apartment. Is it a case of mere jealousy or has there been a betrayal of a more dangerous kind?

Because Vida had more than one secret worth killing for.

ABOUT TESSA MORRIS-SUZUKI
Tessa Morris-Suzuki divides her time between a small village on the south coast of New South Wales and Canberra, where she is Emeritus Professor of Japanese History at the Australian National University.

This is different from the usual crime book.  I was expecting a spy thriller but it didn’t really fit that model either Don’t get me wrong I absolutely loved it It was very eye-opening and insight into life in a different culture and the descriptions  of areas and people was brilliant.

Jun is put ashore from a smuggling ship and sent to carry out a task but he fails and is caught and threatened.  On his knees with a gun to his head he has 2 choices: work for them or die.  Unsure who he will be working for or what he will be doing Jun decides any life is better than no life.  And so begins his ‘training’.

Elly is living in Tokyo, a place she doesn’t know and she doesn’t speak Chinese.  Despite finding out she will never carry a child Elly is happy with Fergus and they begin the process to adopt a child. Then Vida enters their world and things change.  Is Fergus having an affair?

The worlds of Jun and Elly collide and it can only end in tragedy.

A very interesting and gripping thriller I loved reading this very realistic story with unusual characters.  If you like something a little different this is definitely one you should put on your list .

Tessa Morris-Suzuki was born in England and grew up there and in the Netherlands. She later lived for a couple of years in Japan and travelled widely in Asia, but has spent most of her adult life in Australia, where she works as a historian and writer. She currently divides her time between a small village on the south coast of New South Wales and Canberra, where she is Emeritus Professor of Japanese History at the Australian National University. She has published one historical crime novel – The Searcher – set in 19th century London (published by Joffe Books, under the pen-name T. J. Alexander).