Today I am thrilled to be sharing my review of TIMES LIKE THESE as part of the Blog Tour.  This is book 4 in the brilliant Inspector Marco series set in Wales. 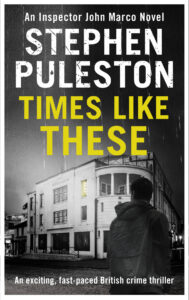 I was thrilled to find out that Stephen had written a new addition to the Inspector Marco series as I do love Marco.  The book more than lived up to expectations.

A gruesome killing with several motives.  Clues point towards a gangland killing but Marco is not convinced. Unfortunately his superiors are leaning towards the gangland theory.  Is Marco losing his touch?  Then there is another death.

This is a very intriguing read I really had no idea who was responsible and there are so many red herrings and dead ends.  Are the deaths connected and if so what connects them.

As more bodies turn up all clues point to an horrific crime many years ago one which was not reported.  Can Marco catch the culprit before anyone else dies?

Marco seems to have really turned his life around although people are concerned that this case may force him to reach for the bottle again.  Can he resist?

An absolutely gripping page-turner that will appeal to anyone who likes a good detective story.