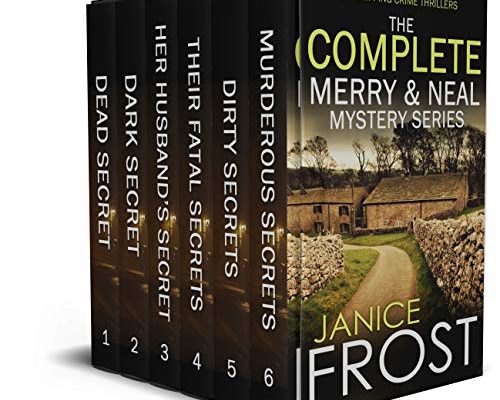 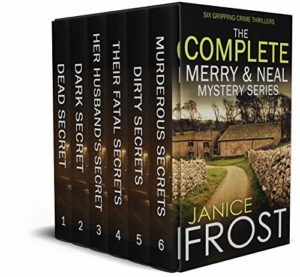 GET THE COMPLETE BEST-SELLING SERIES IN THIS BRILLIANT BOXSET. YOU GET *SIX* CRIME MYSTERIES FULL OF TWISTS.

What readers are saying about Janice Frost’s books

“A wonderful story of intrigue, mystery and murder keeps you reading” Ron

“A fast-paced mystery with plenty of suspects.” Barbara

“It had me gripped from the first word to the last. I will definitely be reading more Janice Frost books.” Jacqueline

“I just had to keep reading to see what was going to happen next.” Dawn

“Definitely read it, you will be missing out if you don’t.” Marj

“The plot has a depth and keeps the reader always wanting to move forward to the next twist.” Trustyflame

IN THIS SIX-BOOK BOX SET:

BOOK 1: DEAD SECRET
Who killed Amy Hill? Amy Hill, a nineteen-year-old student, is strangled and her body dumped on open ground in the city. New police partners, DI Jim Neal and DS Ava Merry are called in to investigate this brutal crime. The last person to see Amy alive was Simon, the son of a family friend, but before he can be properly questioned he disappears.

BOOK 2: DARK SECRET
Gray Mitchell’s body is found buried under fresh snowfall in the early hours of the morning outside Stromford Cathedral. DI Jim Neal and DS Ava Merry are called in to investigate. It seems that a number of people had motives to kill him, including his partner.

BOOK 3: HER HUSBAND’S SECRET
Two children sneak out on a freezing winter night, hoping to see a ghost. But instead they witness something far more terrifying. A man dumping a body . . .

BOOK 4: THEIR FATAL SECRETS
At the end of a drunken night out two students see something strange in the river: a young woman’s body. Hours later, a second woman washes up on the banks of the same river.

BOOK 5: DIRTY SECRETS
Val Marsh gets home to find her husband Russell shot through the head. Russell’s ‘angel investment’ company had made him many enemies. Business was bad, and his family and friends weren’t all on his side. But did any of them really want him dead?

THE DETECTIVES
DS Ava Merry is a young policewoman, recently promoted to detective sergeant. She is fitness fanatic with a taste for dangerous relationships. DI Jim Neal is single dad who juggles his devotion to his job with caring for his son.

If you like Angela Marsons, Rachel Abbott, Ruth Rendell, or Mark Billingham you will be gripped by this series.

Don’t miss out on this acclaimed series of unputdownable mysteries! YOU GET ALL SIX OF THE ABOVE BOOKS IN THIS EDITION