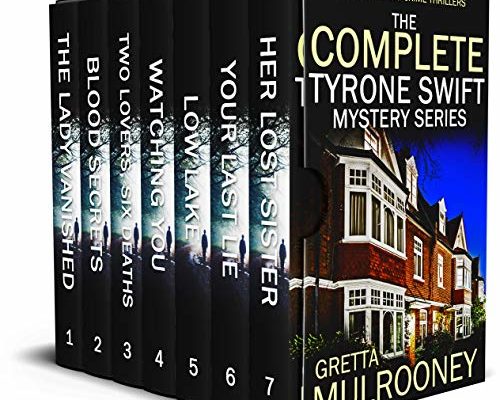 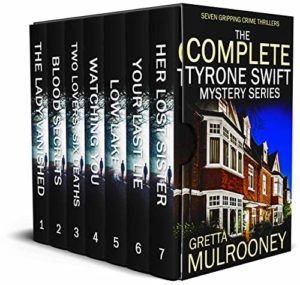 GET THE COMPLETE BEST-SELLING SERIES IN THIS BRILLIANT BOXSET. YOU GET *SEVEN* CRIME MYSTERIES FULL OF TWISTS.

What readers are saying about the TYRONE SWIFT books

“A well written and gripping crime thriller. The chief character is so well defined and so likeable. The story was intriguing and had plenty of twists and turns .” Julia Corbett

“An entertaining and well plotted novel full of suspense and tension.” Paromjit

A brilliantly written mystery. I was interested from the first page.” Teenyp

“I really love this series.” Hannelore

IN THIS SEVEN-BOOK BOX SET:

BOOK 1: THE LADY VANISHED
A missing woman holds the key to a valuable inheritance
Florence Davenport hires Swift to find her missing stepmother. There are no leads and no suspects, but if the body is found, Florence will inherit half of a very valuable house.

BOOK 2: BLOOD SECRETS
Fifteen years ago a teenage boy, Teddy Bartlett, went to a woods on the outskirts of London and was beaten to a pulp and left damaged for life. The police never found who did it or why he was targeted.

BOOK 3: TWO LOVERS, SIX DEATHS
A man stabs his girlfriend to death. Then hangs himself, leaving a note confessing to the murder. Open and shut case? Not for detective Tyrone Swift

BOOK 4: WATCHING YOU
TWO YEARS AGO someone kidnapped Thomas Maddox’s six-month-old son. The case has never been solved and the boy has not been found.

BOOK 5: LOW LAKE
Detective Tyrone Swift is hired to investigate the death of Kim Woodville. Two years ago, the young woman drowned in the lake by her family house. But there was bruising on her arms, and the prime suspect was let go because of police errors.

BOOK 6: YOUR LAST LIE
Pilot Greg Roscoe is found stabbed to death in his cockpit. His body has been mutilated. Detective Tyrone Swift is hired by the pilot’s mother to investigate the death of her beloved son. But Greg wasn’t who she thought he was. He had a tangled personal life, with three wives and a history of adultery and risk-taking.

THE DETECTIVE
Tyrone Swift is an ex-police detective who now works privately. He’s survived a stabbing and his fiancée running off with another man. Swift’s personal life is complicated. He is still involved with his ex-wife Ruth, who is expecting their child, but living with another man. And it’s just about the worst time to begin another relationship but he is tempted by the attractive police detective Nora Morrow.

THE SETTING
The streets of London with their vibrant mix of nationalities, cultures, and rich and poor are beautifully evoked. From the quiet suburbs with their veneer of happy family life, to the bustling centre with refugees struggling to survive, to exclusive penthouses where the rich can have anything they want delivered.

Don’t miss out on this acclaimed series of unputdownable mysteries! YOU GET ALL SEVEN OF THE ABOVE BOOKS IN THIS EDITION