Thank you to all the awesome Bloggers, readers and reviewers who helped with the launch of THE LYING GAME.  Your help is very much appreciated.

Maxine has definitely got me in suspense, the will they, won’t they and the intrigue of Oriana’s quest to find the murderer marry well together.

This was a very good read. I do like Faith Martin. Although this one she is using Maxine Barry. I liked some of the characters. I liked the story.

Faith Martin is one of the best-loved writers of crime fiction and police procedurals writing today, but in The Lying Game – written under the pseudonym of Maxine Barry – she has penned a captivating romantic thriller rich in intrigue, passion, secrets, lies and passion.

Now something a little different for you.  I have been a huge fan of Faith Martin’s work for ages now,  She does writes cracking mystery stories.  What I hadn’t realised until relatively recently was that she writes romantic suspense novels, under the pen name of Maxine Berry.  ‘The Lying Game’ has recently been released by Joffe Books.

The Lying Game by Maxine Barry 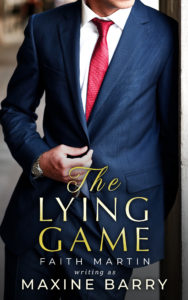 SHE SERVED HER TIME, NOW SHE WANTS TO FIND THE REAL KILLER

Oriana Foster spent thirteen years in prison for a murder she didn’t commit.

Now she’s out and returns to her home village in Oxfordshire. She has one goal: to find the real killer of Rollo Seton.

While inside, a mysterious benefactor has put £2 million in trust for her. She uses the money to buy the Manor House in Nether Dene, the tiny village she grew up in.

THE VILLAGE DOESN’T WANT HER BACK.

She hires Connor O’Dell, a good-looking bodyguard. He’s there in case things get rough. But it’s Lowell Seton, the younger brother of Rollo and the love of Oriana’s life, who quickly becomes the greatest danger . . . to her heart.

THE REAL KILLER WILL STRIKE AGAIN TO PROTECT THEIR SECRETS

“An enjoyable book. Romance with a little intrigue too.” Alexandra

“When you reach the end you will wish there was still more.” Reader

This is a romantic suspense by Maxine Barry (aka Faith Martin)

Oriana has been in prison for 13 years after being found guilty of a murder she didn’t commit.  The story begins with her being released and she begins her mission to find the real murderer.

It is rare that a genre fits a book perfectly but romantic suspense is the perfect fit for The Lying Game.  As Oriana employs a bodyguard, Connor, and begins her investigation the reader becomes gripped by the relationships, love, hate and revenge that all play a part in this book.

I liked Oriana from the start she could be embittered by her experience after all she was only 16 when she went to trial so she has lost her teenage years but she comes accross as a person who accepts the hand fate has dealt and regroups to pick up the pieces.  One of those pieces is a large amount of money left in trust for her by an unknown benefactor.  This unexpected windfall gives her the means to put her plan into action with nothing standing in the way.

Mercedes and Lowell are brother and sister and both were very good friends with Oriana until the fateful day that their brother Rollo was killed and Oriana charged with his murder.  Mercedes and Lowell have every reason to hate Oriana but when they come face to face with her they both realise they are now unconvinced of her guilt.

The story moves along and the relationships become entangled with Connor and Mercedes unable to deny the chemistry between them.  Lowell and Oriana the couple that should have been but never was and then there is Lowell’s girlfriend to add in to the mix. 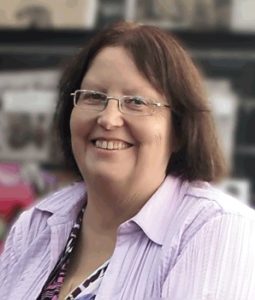 Faith Martin was born in Oxford, and has spent all her life within twenty miles of the university city, even working at Somerville College for five years before turning to writing full-time. The author of the popular DI Hillary Greene novels, she also writes more classic-style ‘whodunits’ under the pen name Joyce Cato, but began her writing career as Maxine Barry, winning an award for penning romance novels! A popular writer for over 25 years, she has had nearly 50 novels published so far. Her hobbies include walking her now ageing dog, wildlife-watching, reading and (reluctantly) gardening.