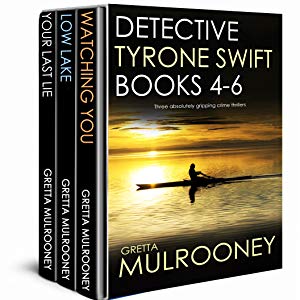 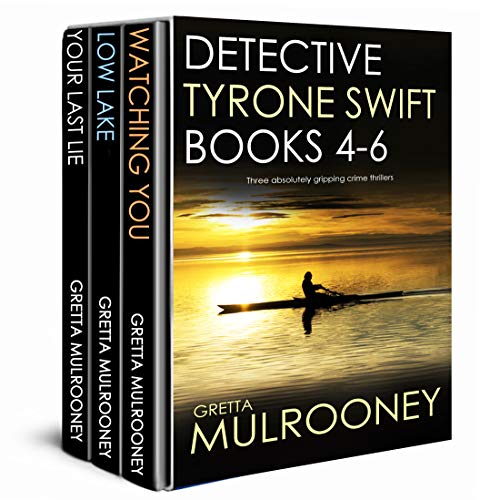 “Swift is a good character, suitable for people who like PD James, the story is believable and comes together well.”

IN THIS THREE-BOOK BOX SET:

TWO YEARS AGO someone kidnapped Thomas Maddox’s six-month-old son. The case has never been solved and the boy has not been found.

NOW someone is watching Thomas and sending him dark emails. And Thomas keeps suffering nasty accidents.

The police won’t do anything more, so Thomas’s wealthy grandfather hires Tyrone Swift to shed light on the case.

Detective Tyrone Swift is hired to investigate the death of Kim Woodville. Two years ago, the young woman drowned in the lake by her family house. But there was bruising on her arms, and the prime suspect was let go because of police errors.

But the beautiful historic house by the lake doesn’t give up its secrets easily.

And then another body turns up close to home and Swift realises his own life may be in danger.

Pilot Greg Roscoe is found stabbed to death in his cockpit. His body has been mutilated.

Detective Tyrone Swift is hired by the pilot’s mother to investigate the death of her beloved son. But Greg wasn’t who she thought he was. He had a tangled personal life, with three wives and a history of adultery and risk-taking.

WHO WANTED HIM DEAD AND WHY?

The prime suspect was cleared by the police but Swift quickly puts together a list of people with a motive to kill Greg. And then Swift gets information from the deceased man’s troubled teenage daughter that may unlock the puzzle.

THE DETECTIVE
Tyrone Swift is an ex-police detective who now works privately. He’s survived a stabbing and his fiancée running off with another man. Swift’s personal life is complicated. He is still involved with his ex-wife Ruth, who is expecting their child, but living with another man. And it’s just about the worst time to begin another relationship but he is tempted by the attractive police detective Nora Morrow.

THE SETTING
The streets of London with their vibrant mix of nationalities, cultures, and rich and poor are beautifully evoked. From the quiet suburbs with their veneer of happy family life, to the bustling centre with refugees struggling to survive, to exclusive penthouses where the rich can have anything they want delivered.

THE AUTHOR
Gretta is a critically acclaimed author of best-selling detective and literary fiction. ‘Mulrooney has a real gift for dialogue, the words and phrases ring true and make her characters wonderfully real . . . A tenderly funny and genuinely moving piece. I loved it.’ Fiona Morrow, Time Out (about ARABY) ‘A beautifully observed study of reconciliation, Araby makes astute points about conflict and shifting values between generations.’ James Eve, The Times

What readers are saying about the Tyrone Swift books:

“A well written and gripping crime thriller. The chief character is so well defined and so likeable. The story was intriguing and had plenty of twists and turns .” Julia Corbett

Don’t miss out on this beautifully written series! YOU GET ALL THREE OF THE ABOVE BOOKS IN THIS EDITION

WATCHING YOU
This is the first Tyrone Swift book I have read and I think I have been missing out on an excellent series.

Tyrone is a very lovable character. Unlucky in love and life but he has let this shape him into a very caring and compassionate man. He is an ex-policeman turned PI and has earned a very good reputation for getting results. This book sees him struggling with a lot of personal issues which leaves him a little vulnerable to the issues that present themselves within the case.

Swift is hired by Gabe to find the sender of threatening emails. As we delve deeper into the case the true personality of Gabe presents itself and it is not a pretty picture. Gabe is an overbearing bullying character with a very inflated opinion of himself. He thinks he knows what is best for everyone and that people should do his will. I didn’t like Gabe but then I am pretty sure I wasn’t supposed to.

The case is prompted by the emails but it actually starts 2 years before when Thomas’ baby is snatched and accidents seem to see him coming. Swift is of the opinion all the events and abduction are linked in some way to the emails but Gabe and the police disagree. Swift begins the long hard job of untangling the webs of lies, deceipt, bribery and relationships and trying to put it all back together.

This is a totally gripping book that grabs the reader at the beginning and doesn’t let go. There are twists and turns all the way through. Just when you think you have worked it out another thread appears which keeps the suspense building right to the very end.

LOW LAKE
This is Book 5 in the Tyrone Swift series but the books work perfectly as stand-alone.

A young woman, Kim, with a lifetime fear of water is found drowned. The verdict is accidental death as she suffered from epilepsy and had suffered a seizure. Swift is employed by Kim’s friend to find out what happened as he doesn’t believe she would go near the water. Kim had a violent start to life and was brought up by a strange woman with an unusual vision on education and guiding young people to adulthood.

The book moves along at a steady pace and gains momentum as it progresses. There are many twists and turns along the way as the reader is caught up in the intrigue and suspense towards a real jawdropping shocker of an ending nobody will see coming.

I like Swift. He is a complex character that develops well into a well rounded realistic character. His girlfriend, Nora, I don’t like so much. I think she is high maintenance and not a good match for Swift. Bella, on the other hand, I do like she is compassionate and caring and would make a good fit for Swift so I will be watching for further books to see how his relationships pan out.

This is a gripping story and one I easily bought in to. It is unique and interesting and has the ability to keep the adrenaline pumping.

YOUR LAST LIE
This is book 6 in the Tyrone Swift series but the books work perfectly as stand alone.

A womanising pilot is found brutally murdered in his aeroplane. The suspects are many. Greg had spent his whole life riding roughshod over women and people. He is a selfish man with no regard for feelings of others. His mother, however, thinks he is an angel and employs Swift to search for his murderer as the police had failed.

Swift’s character grows in this series his daughter’s hearing problems and the difficult relationship with Nora mean he is walking on eggshells trying not to upset people. This case, however, is going to try him to the limit of his patience as everyone seems to have it in for him.

His girlfriend, Nora, I don’t much like I think she is a bad fit for Swift she is too moody and her trust issues mean that Swift is forever monitoring what he tells her. I like her even less after reading this book.

The case is a difficult one. As a pilot the victim travelled the world and Swift finds himself having to think far and wide to find leads to follow. The complexity of the case makes for intriguing reading. Maybe it isn’t as fast paced and adrenaline pumping as I would like but it has enough to hold the reader’s attention and keep the pages turning.

There are many twists and turns along the reading journey and the uncovering of the murderer came as a real curve ball towards the end of the book.

A good read. I am pretty annoyed I didn’t find out what happened to Havanna so I am hoping I don’t have long to wait for the next book.