Thank you to all the wonderful Bloggers, Reviewers and readers who helped with the launch of DEADEYE – you are all AWESOME – Stewart and Jill xx

This was a hugely enjoyable crime thriller/police procedure novel. Once again, author Stewart Giles had really carefully balanced the personal and professional life of Jason Smith so that we care about him and his relationships whilst also admire his skills as a detective. There was one little exchange about the reality of policing compared to novels, and I thought this was a brilliant self-reflexive point that made me smile…

A cleverly thought out plot and wonderful characters and a little humour along the way. Brilliant! Love it and very much look forward to the next in the series.

This is another well written addition to a terrific series. Although this is the 12th book, it is easily read as a stand alone. However, I recommend starting at the very beginning. Smith and his team are great characters and I’ve enjoyed seeing how they grow into their roles. I like the mix of his personal life with his professional side. The plot is well crafted and the ending is unpredictable.

Deadeye is a great addition to this binge-worthy series and something I’d recommend if you are looking for a quick, action packed read.

This book involves the team having to crack a really tough case, and it was good!!!  I like the curve balls that were thrown in to keep you guessing as to who the “Deadeye” might be – plenty of action, great interaction and another fabulous read!!

The high level of research that goes into these stories is abundantly clear, both in the area of ballistics and also the medical issue for Smith which I can say from experience was spot on. It’s yet another hit for Stewart Giles as this fabulous series just gets better and better. Long may it continue and I, for one, am already eagerly awaiting the next story! 5*

#Deadeye – I thoroughly enjoyed reading ‘Deadeye’ even if Smith was put through the wringer again.  ‘Deadeye’ has left me wanting, no make that needing more books in the Detective Sergeant Smith series.

Fantasically well researched by Stewart Giles, as always. The story kept me on the edge of my seat from the first page! Am waiting inpatiently for the next book to appear! – Beyond the Books

The book starts in usual dramatic circumstance, but this time Jason is very involved from the start as he is walking the dogs in the park when he hears screams. He runs over and finds a man has been shot in the head with lots of witnesses about, all of whom saw nothing.

The deadeye with a sniper means business and has to be stopped , and I so enjoyed every single page. Well done again for an excellent read, these characters are starting to feel like friends to me, amazing, I loved reading them all and want more.

As is usual from this hugely talented author, the storyline is brilliant and the plotting is well structured, with twists aplenty and another terrific and unexpected ending! It was very enjoyable, plus I got what I wished for! 😉

DEADEYE Throws a grisly perplexing mystery at you right from the start. Hair raising suspense and a diabolical plot keeps you riveted as the pages flying by.

A stand alone story – one that everyone should read and enjoy. You won’t be disappointed! 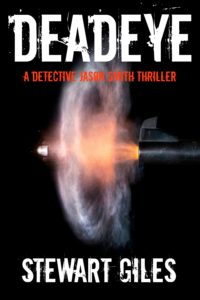 When a man is shot dead in a park not far from where Detective Jason Smith lives, Smith takes it personally.

The man was killed in a precise and cold manner.

Then, when another victim turns up – also killed with absolute precision, Smith realizes he’s on the trail of a killer who will stop at nothing.

I am loving how Stewart Giles is keeping these books coming each one seems to be better than the previous one so I was expecting a fantastic read and I wasn’t disappointed.  Jason Smith a man who has had more bad luck than good.  He has lost so many people and still he picks himself up and carries on catching the bad guys.  Along with his team he has earned a reputation for solving every case and that reputation is well known up and down the country.  He does have his own way of doing things and while his methods are effective they do not always comply with the rules.  This brings humour to the stories making these books different in a very good way.

Smith made a massive mistake in the previous book and is now living with the consequences of his actions.  He is not a happy man but he has had a wake up call and is now determined to repair the damage.

I have to say something about Superintendent Smythe.  I don’t know how he got to be a superintendent the man is an idiot and is inclined to annoy his subordinates but Smith just has no time for the man but to make the situation worse the pair have totally different priorities.  Smith is all about cracking cases and Smythe is all about appearances and statistics.  Sparks are bound to fly and they often do but Smythe is here to stay.  So when Smith finds out that the new DI is Smythe’s nephew he is not a happy man.

So on to the story.  Smith is walking the dogs in the park when he hears screaming.  A man has been shot.  So another day off has been cancelled and it is back to work.  However, this is no ordinary case.  As the victims stack up the team are unable to find any link between them.  Someone appears to be randomly killing people with a long range rifle.  With no crime scene to reveal evidence and nothing to link the victims will this turn out to be the first case Smith is unable to crack?

Intrigue, suspense, revenge, betrayal, love, hate and war all come together in this fast paced, totally gripping page turner.  Another 5* winner for me.

THE SETTING
At the confluence of the River Ouse and Foss, York is the traditional county town of the historic county of Yorkshire. York Minster and a variety of cultural and sporting activities make it a popular tourist destination.

THE DETECTIVE
DS Jason Smith is an Australian who was sent to York to live with his Grandmother when his sister disappeared from a beach. He has suffered many losses in his short life and is now a dedicated detective. He is a bit of a loose cannon he has his own way of doing things that doesn’t always mean following orders and procedures. However, he does get results.
WHAT READERS ARE SAYING ABOUT DEADEYE
I so enjoyed every single page. Well done again for an excellent read, these characters are starting to feel like friends to me, amazing, I loved reading them all and want more. – Booklover Bev
I thoroughly enjoyed it. An intelligent, compelling drama with hard hitting twist. – Carol
Intrigue, suspense, revenge, betrayal, love, hate and war all come together in this fast paced, totally gripping page turner. Another 5* winner for me. – I Love Books

In 2014 Ann dropped a rather large speaker on my head and I came up with the idea for a detective series. DS Jason Smith was born. Smith, the first in the series was finished a few months later.
3 years and 8 DS Smith books later, Joffe Books wondered if I would be interested in working with them. As a self-published author, I agreed. However, we decided on a new series – the DC Harriet Taylor: Cornwall series.

I continued to self-publish the Smith series and Unworthy hit the shelves in 2018 with amazing results. I therefore made the decision to self-publish The Backpacker which is book 3 in the Detective Harriet Taylor series which was published in July 2018.

Miranda is something totally different. A stand-alone psychological thriller, it is a real departure from anything else I’ve written before. This was followed by the sequel Mistress in 2019.
The Detective Jason Smith series continues to grow and there are now 13 books including the introduction: Phobia. Book 12: Deadeye will be published in February 2020.