I am unbelievably excited about this book.  I love Joy Ellis’ books so when THE PATIENT MAN was released in audiobook format so much earlier than the kindle version – well I had to download the audiobook and listen.  Wow thats all I can say so here is my review of the audiobook.  HOWEVER, if you prefer the kindle or paperback version and can wait then it is now available to preorder from Amazon – here is the link: The Patient Man Kindle preorder link 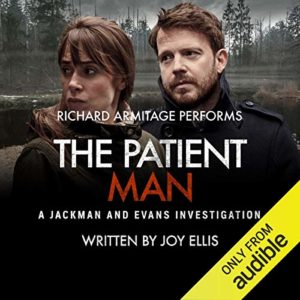 A mystery which will captivate you till the dramatic ending.

Jackman and Evans’ most dangerous enemy is back to finish things off.

The domestic bliss of Detective Inspector Rowan Jackman, of Fenland Constabulary, doesn’t last long. His old nemesis, serial killer Alistair Ashcroft, is back in town and ready to tidy up unfinished business.

Everyone Jackman cares about is in danger. Alongside the hunt for Ashcroft, however, normal police work must continue. The separate thefts of six pigs, a thoroughbred stallion, guns and some oil lead Jackman’s crew to the notorious Lorimer family, ruled over on their farm by the fearsome matriarch Rachel.

Meanwhile, a seemingly routine break-in at the home of gun-club owner Kenneth Harcourt quickly becomes more complicated when the man long held responsible for having killed Harcourt’s young daughter in a hit-and-run is shot dead in a car park – by a sniper. A killer is on the loose in the quiet streets of Saltern-le-Fen, and he isn’t going to stop at claiming one life. But why is he focusing on young Kevin, so close to promotion to detective?

And the sniper, like Ashcroft, takes to taunting the police: they’ll never catch him, they need to respect him, they shouldn’t be sidetracked looking for their old adversary.

In a stunning conclusion, Jackman and Evans race against time to catch the sniper and track down their deadly adversary. A lethal game with a very patient man. Full of twists and turns, this is a crime thriller that will keep you listening until the shocking ending. Set in the atmospheric Lincolnshire Fens whose towns and isolated villages hide many dark secrets.

Audiobooks are very new to me, so new this is my second book but also the reason I decided to dip my toes in the water of audiobooks as this one has been released in audio format several months before the Kindle and paperback versions and it is a Joy Ellis book so I couldn’t wait could I?  It is also narrated by Richard Armitage and I have heard great things about his narration.

Alistair Ashcroft is Jackman’s nemesis well he is the nemesis of the whole team. All have been affected by his action but Marie and Jackman have not only been injured but have also had loved ones taken away from them by him. The team was devastated when he escaped capture and now he is back!!

This book kicks off the adrenaline boost at the very beginning and it doesn’t let up I devoured every page making myself take my time reading to really savour the story.

So with a sniper on the loose and an innocent family caught up in the mayhem will Jackman and his team crack the case and bring down Ashcroft or will he escape again leaving devastation behind him?  You will have to listen to the book to find out.

The narration is everything I expected although I have to admit I had imagined Jackman to have a different voice so was a little thrown at first but I wasn’t very far in before I realised that Richard had got it right and the voice worked perfectly as did the others.  I found listening to such a brilliant book while out walking in the Derbyshire countryside was a very enjoyable experience so I will be listening to more audiobooks.

Another 5 golden stars to Joy Ellis for another brilliant addition to an awesome series.

The Jackman and Evans series by Joy Ellis

Twenty years ago: a farmer and his wife are cut to pieces by a ruthless serial killer.  Now: a woman is viciously stabbed to death in the upmarket kitchen of her beautiful house on the edge of the marshes.  Then a man called Daniel Kinder walks into Saltern police station and confesses to the murder.  But DI Rowan Jackman and DS Marie Evans of the Fenland police soon discover that there is a lot more to Daniel than meets the eye. He has no memory of the first five years of his life and is obsessed with who his real mother is.  With no evidence to hold him, Jackman and Evans are forced to let him go, and in a matter of days the lonely Lincolnshire Fens become the stage for more killings and Daniel has disappeared.  In a breathtaking finale, the truth about Daniel’s mother comes to light and DI Jackman and DS Evans race against time to stop more lives being destroyed.

TWO GIRLS GO TO A PARTY, ONLY ONE RETURNS ALIVE Toni, the surviving teenager, is found deliriously wandering the muddy fields of the fens. She has been drugged and it’s uncertain whether she’ll survive. She says she saw her friend Emily being dragged away from the party. But no one knows who Emily is or even if she’s still alive . . . Meanwhile the drowned body of another girl has been found on an isolated beach. And how does this all relate to the shocking disappearance of a little girl nearly a decade ago, a crime which was never solved? The girl’s mother is putting immense pressure on the police to re-open the high-profile case. FOUR GIRLS. FOUR DAUGHTERS. FOUR FAMILIES WHO NEED JUSTICE AND CLOSURE. DI Rowan Jackman and DS Marie Evans of the Fenland police are stretched to the limit as they try to bring the perpetrators of these shocking crimes to justice.

FOUR LOST FRIENDS. FOUR TASKS TO COMPLETE. ONE BIG MYSTERY LEFT. Police detective Carter McLean is the only survivor of a plane crash that kills his four best friends. He returns to work but he is left full of guilt and terrible flashbacks. So for each of his four friends he decides to complete something that they left unfinished. Eighteen months before the crash, Suzanne Holland disappeared, leaving a room with traces of blood, but no other leads. Suzanne was the wife of one of Carter’s four best friends. Adding to the pressure, the boss’s niece has a stalker. Due to the sensitivity of the Holland case, Carter is put on this investigation. DS Marie Evans is the only person Carter can confide in. But even she begins to doubt whether he can really cope and whether he is actually losing his mind. DI Jackman and DS Evans of the Fenland police face a battle to untangle three mysteries, and can they really believe their friend and colleague Carter?

Jackman and Evans #4: The Guilty Ones AMAZON GOODREADS

THE MOST DIFFICULT CASE OF DETECTIVE JACKMAN’S LIFE. WHO ARE THE GUILTY ONES AND IS ANYONE REALLY INNOCENT? THIS TIME IT’S VERY PERSONAL FOR JACKMAN.  Jackman’s sister-in-law Sarah disappears to London and throws herself into the river. What drove her to this? She was a woman with a seemingly happy home life and two beloved sons.  DI Jackman and DI Evans dig into Sarah’s life. And Jackman realises he knew almost nothing about his sister-in-law’s past.  Then, they discover a woman in a neighbouring village died in similar circumstances.  What is the connection to a convicted murderer whose family are convinced he is innocent? Who is really pulling the strings?  DI JACKMAN AND DS EVANS OF THE FENLAND POLICE FACE A BATTLE AGAINST THEIR MOST DANGEROUS AND DEADLY ADVERSARY.  And in a case so close to home can Jackman keep his feelings under control?

A MYSTERY WHICH WILL CAPTIVATE YOU TILL THE STUNNING ENDING  A crime wave has hit town. The target is a highly sought-after brand of streetwear called Hybird X, clothing that costs a fortune and resells for unbelievable prices. Houses are burgled, kids mugged on the streets . . . and finally a young man dies, all for the sake of his shoes.  Then another boy’s body is found in a pile of rubbish. Meanwhile illegal steroids are flooding the streets. And there are dark movements on the marshes.  CLOTHES THAT PEOPLE WILL KILL TO OWN A shadowy figure called Darke and his teams of young criminals seem to be behind it all.  Detectives Jackman and Evans must take on a fiendish criminal, while still haunted by Alistair Ashcroft, the serial killer they never caught.  WHO IS DARKE AND WHAT DOES HE REALLY WANT?