Happy New Year and we would like to start 2020 by saying a big THANK YOU to all the Bloggers, reviewers and readers who helped with the launch of THE TRUTH ABOUT MURDER your help at such a hectic time of year is very much appreciated.

As with all of Chris books this one is brilliant, and as it is a new one away from the Tom Mariner series, we learn an awful lot about the new PC quickly which helps with the flow of the story.

Quite a twisted tale where I gasped and shook my head at the human psyche. The author used pure strategy to hide the clues in the shadow of goodness. Wicked purely wicked…

The story unravels slowly as the reader gets more information and evidence to piece together, and it was intriguing waiting to find out the extent of Denny’s involvement and for Mick and Stefan to finally join forces.

The Truth About Murder is realistic police procedural which will equally enthrall and chill you to your core.

Such an intricate story with sub plots all weaved together so cleverly you are intrigued until the very last page!

This is a well written complex stand-alone police-procedural. The story is told by two men … Greaves from his point of being a lawyer, as well as a victim and Fraser, the young cop who wants to get it right. There’s plenty of action and lots of suspense.

The plot unravels at a steady pace and reveals little bits of the jigsaw along the way.  It’s pacey enough to keep the reader interested but not so fast that you miss bits.

THE TRUTH ABOUT MURDER by Chris Collett 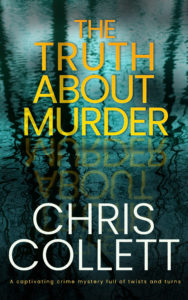 Stefan Greaves emerges from a coma. He was brutally mugged while investigating a whistleblower complaint at a local hospital. She had feared mortality rates of children on her ward born with terminal illnesses and disabilities were on the rise. Now the whistleblower has disappeared.

PC Mick Fraser is sent in to interview Greaves. His partner, PC Denny Sutton, has just been murdered.

Then the whistleblower is discovered murdered and Fraser learns that Sutton had been stealing evidence to cover up crimes against those considered to be a drain on society: homeless and disadvantaged people and the mentally ill.

HOW ARE THESE CRIMES LINKED?

A fiendishly complex puzzle emerges. Can these two detectives learn to trust each other enough to put the pieces together?

Wow where do I start?  I read and loved all the Tom Mariner series by Chris Collett (more to come hopefully) but I knew this was something new so I wasn’t sure what to expect but I was not to be disappointed.

Stefan is attacked on the way back from buying some milk at a local shop.  He wakes up in intensive care with no memory of what happened.  PC Mick Fraser is waiting for him to wake up to find out what he could remember.  He wasn’t to learn much about the attack but what he did learn was to shock him to his core.

As Stefan recovers and returns to work he meets Rita, a nurse who is at risk of losing her job.  As it turns out the job was not all she was about to lose.

It took me a while to get to know Mick Fraser but he grew on me over the course of the book.  He is pretty green where corruption is concerned and likes to think the best of people.  Stefan I absolutely love.  Disabled by a difficult birth he has embraced his disabilities and lives a happy life with all his needs met (one way or another)  He is a little precious where his disabilities are concerned and puts up very impenetrable barriers if anyone suggests he should be ‘corrected’  he wants to be liked and loved for who he is, disabilities and all.  This is something I love about him.

This isn’t a fast paced gritty type of book it is all about the detecting and uncovering clues which makes it very gripping given the unique but very believable storyline.  I could relate to the story as this type of thing does go on in todays world despite us liking to believe it doesn’t.

So all in all an absolutely brilliant read and I am really hoping for more books featuring these complex characters.

What readers are saying about Chris Collett

“I couldn’t put it down.” Barbara

“Definitely one of the best British crime novels I have read, with a great plot that twist and turns.” Terje

“A brilliantly well thought out mystery with plenty of red herrings.” Jacqueline

“Cleverly plotted, with an unexpected shock ending, plenty of suspense, and a likably genuine cast of characters, this is a strong new entry in an increasingly popular police-procedural series.” Booklist 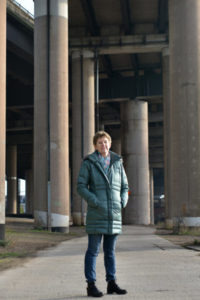 I was born and grew up in a Norfolk seaside town, almost as far east as it’s possible to go in England without falling into the North Sea. There I worked variously in a boarding house (now defunct) a local bakery (closed down) and a crisp factory (razed to the ground). I graduated in Liverpool, then for twenty-five years taught children and young people with learning disabilities, including autism, before going into higher education as a senior lecturer.

Mindful of its reputation, I moved somewhat reluctantly to Birmingham, where I met my husband, in 1981. But just a few years later DI Tom Mariner was created to police its mean streets, and these days I relish the vibrancy and rich social history of the city. After eight outings for Mariner, I still feel as if I’ve barely scratched the surface.

Recently retired from lecturing and I’m currently luxuriating in the time I now have to continue the Mariner series, alongside published short stories and academic works. In my spare time, among other things, I’m a manuscript assessor for the Crime Writers Association.