Chris, Joffe Books and I would like to say a very big THANK YOU to all the wonderful bloggers who helped with the launch of SHE WILL RESCUE YOU.  Your help in promoting this book is very much appreciated.  You are all awesome x.

‘She Will Rescue You’ is really well written with more than an air of authenticity to it. The author is a former police officer and she has drawn on her many years of experience to write a fantastically scary, realistic and downright thrilling read.  Read more here

This is a well-written novel with credible characters. Ellie and Mia are on opposite poles .. but are they really all that different? It’s a fascinating read … and would make a great discussion for book clubs.  Read more here

This is a fast-moving story with plenty to keep the reader interested although it doesn’t overload the reader with horrendous detail. It kept me glued to the page. An author to look out for!   Read more here

I enjoyed She Will Rescue You immensely! I highly recommend it and I’m really excited to read more from Chris Clement-Green.  Read more here

The author Chris Clement-Green has really spun a good tale. This book would be brilliant for a book club as the opposing viewpoints would provide an excellent debate. It is so thought provoking and relevant to today’s modern society as well as my own personal journey to be vegan and cruelty free.  Read more here

It is really fast paced and carried me all the way to the end in almost a whirl.  Read more here
The Word is Out A debut novel which certainly made an impact on me (I loved it!) and which has a very unique feel about it. The story revolves around two women, both sad and lonely in their own ways.  Read more here

Overall this is a brilliant book, which had me hooked throughout as it is such a different book to normal, and the characters are so well written that you have to feel for them all as the story progresses.  Read more here

SHE WILL RESCUE YOU by Chris Clement-Green 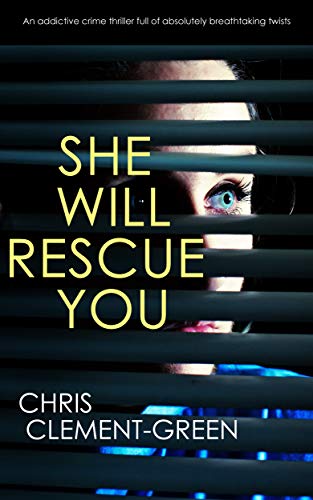 Dr Mia Langley is a criminal forensic psychologist working for the National Crime Agency. Elegant, intelligent, and ambitious but lonely. She works among society’s darkest minds in perpetrator profiling.

A man is murdered in a Norfolk turkey shed. Just another violent incident or something more?

Ellie Grant is a lonely young woman. She works for minimum wage at an animal shelter and nurses a simmering hatred for all those who abuse animals.

When she “finds” a winning lottery ticket, she face a terrible choice: use the money for what she believes in or give the ticket back to its rightful owner.

THE TWO WOMAN WILL BECOME LOCKED IN A BATTLE WHICH WILL TEST ALL THEIR BELIEFS. HOW FAR WILL EACH OF THEM GO?

And both women fall in love with the same man.

WHOSE SIDE ARE YOU ON?

Discover a race-against-time thriller which will have you gripped from the first page to the last.

THE AUTHOR
Chris(tine) Clement-Green retired from Thames Valley Police after sixteen years as a uniform sergeant followed by five as a civilian investigator on serious and organised crime teams in Humberside and Wiltshire – which included working on several murder incident rooms and national drug operations. She is the author of the memoir, “Into the Valley.”

I retired from Thames Valley Police after sixteen years as a uniform sergeant followed by five as a civilian investigator on serious and organised crime teams in Humberside and Wiltshire – which included working on several murder incident rooms.

My serious writing started in 2007 when I entered the National Association of Writer’s Groups annual short story competition. It was my first competition so I was astonished to win with Pebbles. This win encouraged me to undertake the Open University Creative Writing and Advanced Creative Writing courses, which I completed with distinction. In 2013 I was accepted onto the prestigious Bath Spa University Creative Writing MA, where I completed a humorous but gritty life-writing manuscript Into the Valley which was subsequently published by Mirror Books in 2017.

I have had several articles and letters published in national UK magazines, most notably Writing Magazine, and in September 2016 I was published in The New Guard Volume V a literary journal based in New York. I have also been short listed in the Literature Works First Page Writing Prize and in several Writing Magazine competitions. In 2016 my fantasy short story, Layla, was published in Divinity Fantasia Magazine and I won the Oriel Davis Prose Competition with Cosmic Tiger and was also a finalist in the Women in Comedy Festival with my monologue Queenie. This year my article Food for Thought was runner up in the Scribble annual article completion, and I co-wrote a piece on the subject of Mentoring with James McCreet which was published on the 6th September 2018.

My recently completed debut novel She Will Rescue You is being published on the 30th May 2019 by Joffe Books and I am currently working on a new crime novel – Rage Hard which is another police procedural set in Oxford revolving around a white WPC and black criminal during the race riots of Thatcher’s Britain.

I also run tutored and untutored writing retreats from my home in mid Wales – thewelshwritingshed.co.uk