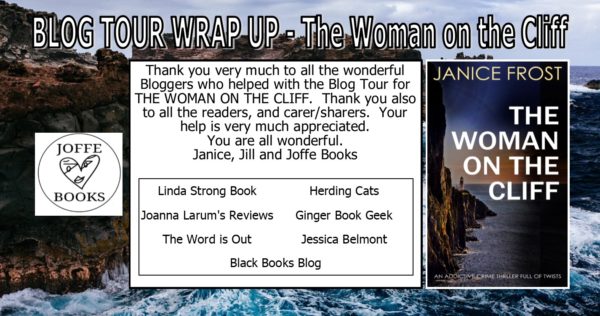 This is a solidly written mystery with characters that stand out. Plenty of action and twists and turns keep the reader glued to the pages. Read more here

What you think is clear cut at the start of the book becomes very murky as the story progresses and the reader learns some disturbing truths about relationships in that house before Moira’s death. This story is a great mystery story, with lots of twists but the big question is will the truth ever be revealed? A clever plot and highly recommended.  Read more here

The characters were incredibly well-drawn (I have met many people who have displayed similar characteristics and failings) and I was hoping all the way through that Innes and Ros would hit it off. A wonderful story and so well-written. I am a huge fan!   Read more here

Janice Frost knows how to keep her readers invested. The characters stand out as realistic and relatable. The plot is well-paced and the twists are really great. I was definitely surprised a few times. Read more here

Janice Frost is a superb writer and ‘The Woman On The Cliff’ is a superbly written book.  Janice knows how to draw you into the story from the first word and she keeps your attention all the way through the book with fresh shocks and surprises awaiting you over every page.  Read more here

The book has a lot of twists in it, both in the past and present day aspects, which kept me guessing throughout. I really liked the two main characters as they investigated what had happened and we got to know the back story in a very unique way throughout the book. Read more here

THE WOMAN ON THE CLIFF by Janice Frost

SHE WILL RISK HER LIFE TO FIND THE TRUTH

1988. The body of Moira Mackie, a St Andrews University student, is found on a clifftop path. Her ex-boyfriend is found days later, hanged in his uncle’s garage with a suicide note confessing that he killed her. The case is abruptly closed.

Thirty years later, Ros Maitland has seemingly moved on from the horrific murder of her housemate Moira. Then her daughter takes up a place at the same university, and old demons reawaken.

Was Moira murdered in a lover’s quarrel? Or was her death part of something far larger, uglier and more calculated?

WHAT REALLY HAPPENED THAT TERRIBLE NIGHT?
Policeman, Innes Nevin, investigated Moira’s death and has been haunted by it ever since. It was his first murder case, and he knew it had been closed too soon.
Innes and Ros must delve back into the painful past to finally bring the truth to light.

THEN COMES A BRUTAL TURN OF EVENTS. SOMEONE WANTS THEIR INVESTIGATION STOPPED AT ALL COSTS.

In an electrifying standoff, Ros must risk everything she cares about.

CAN SHE FIND THE TRUTH ABOUT THE DEATH AND ESCAPE WITH HER LIFE?

PRAISE FOR JANICE FROST’S ‘DEAD SECRET’
“A brilliant new detective writer who will have you reading all night. ” Chris Child
“I couldn’t put this story down; the amount of intrigue was breathtaking.” Karen
“Excellent twists and turns plus a few moments where I was completely gobsmacked” Jaffa

I am the author of five crime/mystery books featuring Detectives Jim Neal and Ava Merry. My novels are set in the fictitious East Midlands cathedral city of Stromford.

Dead Secret sees Jim and Ava pairing up to investigate the murder of a teenage girl. It is their first major case together and the two soon discover that they have very different personalities. Neal is intellectual and considered, Ava clever and occasionally reckless. Both are passionate about the job they do but have to work hard at being an effective team.

I am originally from West Lothian in Scotland but moved to London in my early twenties. I lived and worked in the East End for ten years before moving to Lincolnshire where I currently live with my husband and two grown-up sons. When not reading or writing, I enjoy walking in the hills absorbing the scenery.

I am delighted to be published by the wonderful Joffe Books.