Today is publication day for THE SOUTH BINNESS MURDERS by Pauline Rowson.  This is book 16 in the Solent Murder Mystery series and is a gripping read that is perfect for anyone who likes Crime Fiction.

DETECTIVE INSPECTOR ANDY HORTON IS BACK IN THIS BRAND-NEW CRIME THRILLER. OVER 100,000 BOOKS SOLD!

Meet DI Andy Horton. He’s a risk-taking Harley-Davidson-riding detective who doesn’t always play by the rules . . . which often lands him in trouble with his bosses.

There’s a large pool of blood on the deck and heavy crimson spatter up the side of the storage lockers. But no sign of a body on board.

Detective Inspector Andy Horton is on the case. He discovers the boat owner’s identity: Neil Spender, a Portsmouth binman. But he’s nowhere to be found.

It’s not long before Horton’s pulled into another investigation involving an unusual robbery at a local art gallery. Three paintings have been switched for forgeries.

The gallery owner is adamant the originals have been stolen. But there’s no evidence of a break-in.

Now Horton and Cantelli have a murder investigation to solve and a cunning art fraudster to find. Time is ticking for our dogged detectives . . .

“A great read for mystery lovers with plenty to keep you guessing until the last moment.” Crime Book Club

“The Harley Davidson-riding, boat-dwelling Horton is a fascinating man to get to know, and his thoughtful approach to detection is a pleasure to read.” Publishers Weekly

⭐⭐⭐⭐⭐ “Once you get to know Andy Horton you’ll be sure to name him as one of your favourite police characters in crime fiction.” James C.

⭐⭐⭐⭐⭐ “Couldn’t put this book down . . . I thought the story was brilliant and will definitely be reading the next book.” Nikki

⭐⭐⭐⭐⭐ “Pauline Rowson’s books are cleverly plotted with lots of twists and turns . . . For anyone who enjoys a gripping crime novel these are a must.” Darren C.

⭐⭐⭐⭐⭐ “Love all of Pauline Rowson’s books. If you like a good twist, read this, you won’t be able to put it down!” Amazon customer

THE DETECTIVE
DI Andy Horton’s mum walked out on him when he was a child and he grew up in children’s home. Now he lives onboard his yacht in Southsea Marina. He rides a Harley-Davidson and never wears a suit or tie — unless it’s to go to court. He’s an instinctive copper and a man of contrasts, which often lands him in trouble with his bosses. He has a desperate need to belong, and yet is always just on the outside. Self-contained, afraid to show his feelings, but he’s a risk-taker that seeks justice.

THE SETTING
Portsmouth boasts a vibrant waterfront, a diverse multicultural population, an international port, a historic dockyard, and is home of the Royal Navy. Portsmouth Harbour is one of the busiest in the world — and one of the best places to hide a body, it seems. Set against the backdrop of the sea, the Solent area of Portsmouth and the Isle of Wight is every detective’s worst nightmare. The sea is ever-changing and often the best clues get swept away by the tide. 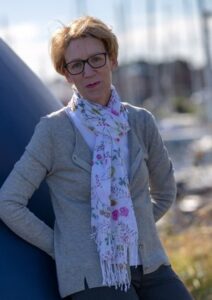 Adventure, mystery and heroes have always fascinated and thrilled Pauline, that and her love of the sea has led her to create her exciting and gripping range of crime novels.

Born and raised in the coastal city of Portsmouth in the UK, Pauline Rowson draws her inspiration for her crime novels from the area. When she isn’t writing (which isn’t often) she can be found walking the coastal paths on the Isle of Wight and around Langstone and Chichester Harbours looking for a good place to put a body!

Pauline is the author of twenty-four crime novels — sixteen featuring the rugged and flawed Portsmouth detective, Inspector Andy Horton; four in the mystery thriller series featuring Art Marvik, the troubled former Royal Marine Commando now an undercover investigator for the UK’s National Intelligence Marine Squad (NIMS); two standalone thrillers, the award-winning In Cold Daylight and In For the Kill, and the 1950 set mystery series featuring Scotland Yard detective, Inspector Alun Ryga, who makes his debut in Death in the Cove with his second investigation Death in the Harbour.

Her crime novels have been highly acclaimed in the UK, USA and Commonwealth and they have been translated into several languages. Multi-layered, fast-paced, and compelling, they are full of twists and turns and are played out against the dramatic and powerfully evocative British marine landscape of the south coast of England.

Pauline is a member of the Crime Writers’ Association and the Society of Authors. Before becoming a full-time writer, she was a renowned marketing and training guru, with a collection of ‘how to’ business books and a successful marketing, media and training career behind her.