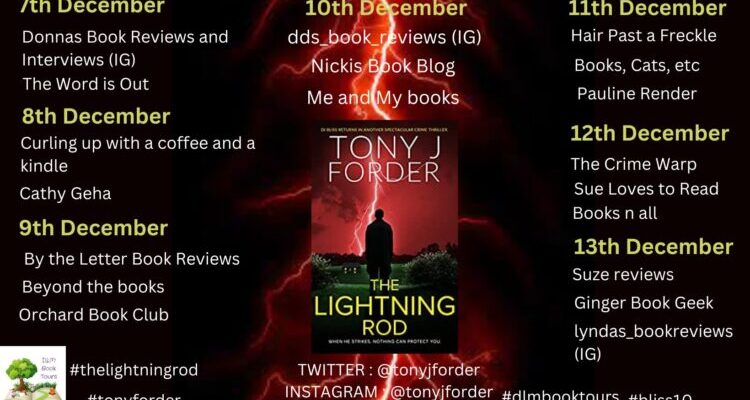 Today I am thrilled to be part of the Blog Tour for THE LIGHTNING ROD by Tony J Forder.  This is book 10 in the brilliant DI Bliss series and is a gripping read. 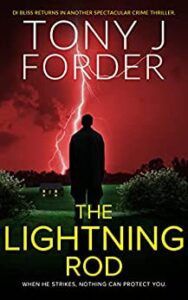 DI Bliss attends the aftermath of an apparent murder-suicide – but the scene tells him and his colleagues something very different occurred. Now the Peterborough Major Crimes Unit face an adversary like no other.

But while the killer is cunning, leaving no evidence for them to find, his biggest mistake might be in underestimating the team now hunting him. Because when Jimmy Bliss is on the case, all bets are off.

DI Bliss is back in this stunning addition to the series.

The story starts with the scene of a murder that is very similar to a  suicide/murder case a few years ago.  Did the team get it wrong with the earlier case?  Was something missed?  As the team find themselves being investigated the pressure is on to find answers to both cases.

It soon becomes clear that they are dealing with a very meticulous and talented fixer.  But the question on everyone’s mind is who is hiring this fixer and why.

As with all Tony’s books the suspense starts at the beginning and continues to ramp up all the way through.  It is a complex story with many threads.  False trails lead to dead ends and this fixer is good, very good and also forensically aware.  Will this be the case that Bliss can’t crack?

I loved catching up with familiar characters and meeting new ones.  The story is unique and complex it really got the adrenaline pumping.

A brilliant read as always.  5 stars from me.  Thank you to the author for the ARC in return for my honest, unbiased review.

Tony J Forder is the author of the bestselling DI Bliss crime thriller series. The first seven novels, Bad to the Bone, The Scent of Guilt, If Fear Wins, The Reach of Shadows, The Death of Justice, Endless Silent Scream, and Slow Slicing, were joined in December 2020 by a prequel novella, Bliss Uncovered. The series continued with The Autumn Tree and Darker Days to Come, and The Lightning Rod will be released in December 2022.

Tony’s other early series – two action-adventure novels featuring Mike Lynch – comprises both Scream Blue Murder and Cold Winter Sun. These books will hopefully be joined in 2023 by The Dark Division.

The Huntsmen, released in October 2021, was the first book in a new crime series, set in Wiltshire. It featured DS Royston Chase, DC Claire Laney, and PCSO Alison May.

Tony’s first 8 novels were originally released by a publisher specialising in crime fiction. In 2020, Tony decided to strike out on his own, and subsequently negotiated the return of all publishing rights to himself. Each of those 8 books has subsequently been re-released under his own imprint, Spare Nib Books.

Tony lives with his wife in West Sussex, UK, and is a full-time author. He is currently working on the second DS Chase novel, The Predators.