Today I am closing the Blog Tour for LAST ONE ALIVE.  This is a brand new addition to the brilliant DETECTIVE MADDIE IVES series. 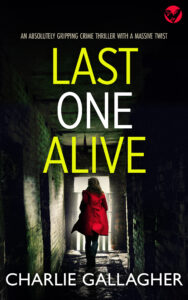 Meet Detective Maddie Ives in this brand-new book that will have you gripped from the explosive start to the most shocking ending of the year.

WHEN THEY WAKE UP, THEIR NIGHTMARE BEGINS . . .

Daisy-Mae is now sure she’s awake. It’s not the cutting breeze or the musty smell that has her convinced, it’s the pain. You can’t dream pain. She is being held down, something tight over her arms, her chest too.

She turns her head for a different view: a whitewashed wall, faded by time, scuffed to add to the impression of a building deserted in a hurry. But there is something in the room that looks fresh: graffiti.

The letters spell out three words that are enough to have her retching again: DON’T WAKE UP.

A KILLER WHO GETS HIS KICKS FROM KEEPING HIS VICTIMS ALIVE AND GIVING THEM A GLIMMER OF HOPE.

Twenty-two years ago, New Year’s Eve. Two young women set off home from the nightclub where they worked. Their battered bodies were found five days later. The killer was never caught.

IS HISTORY REPEATING ITSELF?

Time is running out. Detective Maddie Ives is their only chance to get out alive.

DON’T MISS THE MOST UNPUTDOWNABLE THRILLER YOU’LL READ THIS YEAR!

PRAISE FOR LAST ONE ALIVE:

⭐⭐⭐⭐⭐ ‘A real heart-thumping crime thriller that gave me chills, and I literally have no nails left!’ Peggy B.

⭐⭐⭐⭐⭐ ‘What an incredible ending! If you like thrillers that leave you scrambling to keep up, you MUST read this book!’ Jen D.

THE DETECTIVE
Detective Sergeant Maddie Ives was destined for the top. Plucked from the police training college before ever making the street, she was thrust into the world of undercover policing that forces a young woman to survive on her wits. It worked, Maddie seemed to find her place. But a simple mistake saw her once again wrenched out of her comfort zone. From a broken family, now with a broken career — both of which have played their part in conditioning her never to let anyone too close — Maddie finds herself investigating a murder in a new county and in a team full of strangers, hoping her passion for the truth and protecting the vulnerable will be enough.

THE AUTHOR
Charlie Gallagher was a serving UK police officer for more than ten years, starting as a front-line response officer, then as a member of a specialist tactical team and as a detective investigating serious offences.

ALSO BY CHARLIE GALLAGHER
MADDIE IVES SERIES
Book 1: HE IS WATCHING YOU
Book 2: HE WILL KILL YOU
Book 3: HE WILL FIND YOU
Book 4: HE KNOWS YOUR SECRETS
Book 5: HE WILL GET YOU
Book 6: THE DEADLY HOUSES
Book 7: LAST ONE ALIVE

I would like to thank Netgalley and Joffe Books for an advance copy of Last One Alive the seventh novel to feature Acting Detective Inspector Maddie Ives of Kent Police.

Daisy-Mae Adams fails to turn up for work at The Ugly Jug coffee shop and as it’s out of character her manager, Megan, reports her as a missing person. The next day Megan has disappeared and Maddie is sure neither disappearance was voluntary, especially when she discovers that the Ugly Jug is on the premises of a former nightclub, The Ugly Sisters, which gave its name to a series of abductions and murders twenty years ago after two employees were taken and killed.

I enjoyed Last One Alive, but it feels like a major change of direction for the author. Not to put too fine a point on it it is slow moving rather than the high octane adrenaline filled rush we are used to and more psychological.

The novel has three points of view and rotates between them, Maddie’s investigation, Daisy-Mae’s experiences at the hands of an unidentified perpetrator and lastly Paul Morgan’s journal as he explains the events of twenty years ago and his involvement. For the first half of the novel I found the journal by far the most interesting and compelling part of the novel as it is the only part making progress. Maddie is still trying to decide what she’s investigating and Daisy-Mae’s story is repetitive. That changes in the second half when Maddie’s investigation starts motoring as she puts the pieces together., so after an unpromising start it becomes absorbing.

This is a clever novel and obviously a lot of thought went into the planning. There is a certain amount of misdirection, so the reader is never quite sure where the stable ground is. There are quite a few surprises and twists, but the resolution requires a lot of swallowing of disbelief. I’m not quite sure what to think of it, to be honest.

Last One Alive is a good read that I can recommend.

Charlie Gallagher was a serving UK police officer for thirteen years. During that time he had many roles — starting as a front-line response officer, he became a member of a specialist tactical team and finally a detective investigating serious offences. Charlie left to concentrate on writing full time.