Today I am closing the Blog Tour for THE CASE OF THE VANISHING CONMAN by Mithran Somasundrum with a guest review. 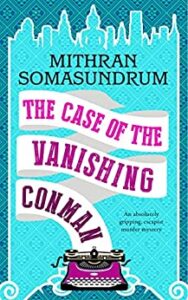 THE CASE OF THE VANISHING CONMAN

A GRIPPING WHODUNNIT FULL OF TWISTS AND TURNS.

A crime boss. His wife. His mistress. And a writer stirring up trouble.

“It all began in a hotel cigar bar in Bangkok’s business quarter; studded leather armchairs, thick brass ashtrays and dim, discreet lighting. Vijay had worn his good jeans and a linen shirt he’d ironed that morning. Meanwhile, Khun Pleum in person matched the stolid respectability of his newspaper photos: an unsmiling, well-preserved sixty-something with greying sideburns. He’d arrived in a coral green silk shirt with heavy gold cufflinks and looked every inch the classic old-money patriarch — someone at the lofty heights of a government ministry, or benignly successful in the world of business.
He looked like he’d never killed anyone.”

In a city where people don’t trust the police, Vijay is a man you can turn to for the truth.

When an author is shot in the leg by a masked gunman, everyone thinks the subject of his new book, the notorious Khun Pleum, is responsible.

Meanwhile, Pleum’s wife finds out from the book that her husband has a young, beautiful mistress. So, without telling Pleum, she also hires Vijay.

Vijay really needs the money, so he takes on both jobs.

Then the book’s publisher is murdered.

Vijay’s caught in the middle of a very dangerous game. He’ll need to keep his wits about him just to stay alive.

SHORTLISTED FOR THE JOFFE BOOKS PRIZE FOR CRIME WRITERS OF COLOUR.

WHAT READERS ARE SAYING ABOUT THE CASE OF THE VANISHING CONMAN:

“I really enjoyed the style of writing . . . There were plenty of twists and surprises in the story.” Janet McM.

“Keeps you guessing and on your toes.” Heather D.

MEET VIJAY
Bored of his job at Bristol City Council, British-Indian Vijay winds up in Bangkok. The bustling, hustling city suits his temperament. Vijay opens a translation agency, along with his assistant, Doi. However, it’s not easy to pay the bills on translation work alone. Fortunately, Vijay’s as good at investigation as he is at presenting perfect prose. Private detective work proves more lucrative than translation — and more dangerous.

I would like to thank Netgalley and Joffe Books for an advance copy of The Case of the Vanishing Conman, a comedy thriller featuring Translator-Detective Vijay Mistry set in Bangkok.

When a true crime writer, who has recently published a thinly veiled exposé of crime boss Khun Pleum, is shot in the leg, Pleum hires Vijay to prove his innocence, something no one believes. Then Pleum’s wife reads the book and discovers he has a mistress, so she also hires Vijay. He needs the money and accepts both jobs, but soon finds himself in deep water when the book’s publisher is shot dead.

The Case of the Vanishing Conman is a mixed bag of good and not so good. On the upside it is told entirely from Vijay’s point of view, so the reader can concentrate on his narrative and investigate alongside him. On the downside I didn’t find it funny. I can appreciate the absurdity of the situations he finds himself in, but they didn’t tickle my funny bone.

The basis of the novel is a big time gangster asking a very small time detective to investigate a shooting he should be able to brush off. Instead of asking why him, Vijay accepts the money and dives right in. He does the same with two other cases that suddenly come to him. The problem is that Vijay is a dreamer with big plans and no concept of his own ineptitude, although, somehow, he seems to arrive at the truth. Making fun a a well meaning man felt uncomfortable to me, even if he manages to win through.

The novel follows Vijay on his investigation as he tries to solve his three cases. The answers come quickly in one case, both to Vijay and the reader as it is easily guessable, he subcontracts the second and gets heavily involved in the third, all while fending off a loan shark and his henchman. There is plenty going on, but I never felt that spark that makes me want to turn the pages quickly. It feels flat and a bit confusing at times, although I feel that the author deserves praise for the unexpected ending.

I like the setting for the novel. Bangkok is exotic to me, but the author doesn’t shy away from either the seedier aspects, like corruption, or the poverty and provides a comprehensive picture of an imperfect location.

The Case of the Vanishing Conman didn’t really appeal to me, but it is a solid read that will be appreciated by many others. 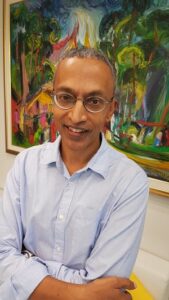 Mithran was born in Colombo and grew up in London. He studied chemistry at Sheffield City Polytechnic and then did a PhD in electrochemistry at Cranfield University. After completing his studies he went to Thailand to work in an electrochemistry lab and, other than a 3-year spell in Japan, has been there ever since.

His short stories have appeared in The Sun, Inkwell, Natural Bridge, The Minnesota Review, Alfred Hitchcock’s Mystery Magazine, and The Best Asian Short Stories 2017, among others. One of his stories was shortlisted for the Bridport 2017 Short Story Prize. His first novel, The Mask Under My Face, was published in 2021 in Singapore by Kitaab.