Today I am thrilled to be kicking off the #BlogTour for SECRETS ON THE ISLAND.  This is book 8 in the bestselling Detective O’Reilly series and is a brilliant addition to the series that I was unable to put down. 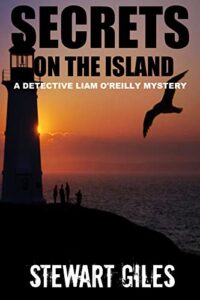 SECRETS ON THE ISLAND

But when a man is murdered days before the reunion of a prestigious school on the island he’s forced to get involved.

The guests attending the reunion are reluctant to talk and O’Reilly knows not everything is as it seems.

A famous actress, a celebrity chef, a controversial author, a US senator, an English MP and a whole host of other public figures happened to attend the school in the class of ’89.

When more guests at the reunion are murdered, O’Reilly finds himself in the middle of the most bizarre mystery he’s ever encountered.

It appears some secrets are worth dying for.

What readers are saying about SECRETS ON THE ISLAND
As always I just could not put this read down full of banter and action with lots of turn arounds but that’s what I enjoy in a book. – Booklover Bev

SECRETS ON THE ISLAND kicks off with an ominous, ghastly discovery in the lead up to a celebratory extravaganza. The mystery creates an all-pervasive atmosphere of foreboding. Hair-raising suspense keeps the pages flying by. Riveting chapters will have you at the edge of your seat, right up to the Poirot-like finish. – Eileen

I thought this an enjoyable and riveting read. The tension slowly builds as celebrities meet for a school reunion, but the reader has no idea what will happen – if anything, as it’s all a question of security. – Carol

Guernsey is preparing for a School Reunion.  1989 was a memorable year for the Queen Elizabeth and many of the pupils  now have very prestigious jobs.  O’Reilly isn’t a fan of reunions and as far as he is concerned protecting the attendees is a security job not a detective’s but his bosses seem to think differently.

However, all that changes when a body is found and the body belongs to the caretaker of the school.  Along with the body is a message.  O’Reilly and his team are flummoxed, what on earth is going on?  Why has a caretaker been killed?  What does the message mean?

It soon becomes clear that the reunion of the class of 89 is very much part of O’Reilly’s job and this is one investigation that is going to test the team to the limit.

A very intriguing and unique story.  I expect nothing less from Stewart Giles.  So many red herrings and twists and turns I was changing my mind all the way through and was still totally shocked at the ending.  Wow I certainly didn’t see that coming.

The characters continue to develop and all are realistic.  My favourite is O’Reilly he is a grumpy detective with a heart of gold and I am loving seeing his character develop along with the others.  Bram, the ginger tom, brings humour to the books ensuring that the reader smiles and it is not too dark.

Another brilliant addition to a gripping series and well worth the 5 stars.  I can’t wait to see what Stewart has in store for him in the next book.

The Detective Jason Smith series continues to grow. I also have another series featuring an Irish detective who relocated to Guernsey. The first 8 books in the Detective Liam O’Reilly series are now available. There are also 3 stand alone novels.