Today I am closing down the Blog Tour for THE SCARECROW by Stewart Giles.  This is book 18 in the Detective Jason Smith series and is an adrenaline pumping read that keeps you on the edge of your seat all the way through. 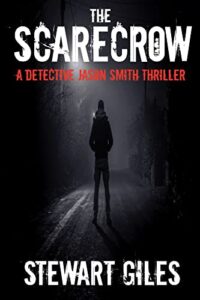 How do you stop a psychopathic killer when they’re always one step ahead of you?

A new kind of murderer has caught the attention of the people of York. His attention is focused on the low-lifes and the bottom-feeders of society.

He calls himself The Scarecrow.

The citizens of York are calling him a hero – a killer ridding society of the undesirables, but Detective Jason Smith can’t accept this.

And when he finds himself first on the scene of this maniac’s first horrific murder, and sees for himself what this self-proclaimed deterrent to crime is capable of, he takes it upon himself to stop The Scarecrow at any cost.

But as the brutal murders continue, Smith finds himself wondering if this is a fight he can actually win.

The Scarecrow refuses to be stopped.

Is this the first killer Smith is unable to beat?

What readers are saying about The Scarecrow

Classic Stewart Giles, an engrossing fast paced murder mystery. This is no ordinary killer. We have a dead man dressed as a scarecrow and a fake police officer! The interesting saga/drama of Smith’s personal life continues. I enjoyed the vivid descriptions of the crime scenes. Read it in one sitting and loved it!. – Carol

Every riveting chapter keeps you on the edge of your seat. Intense turmoil develops as surprising information comes to light leading to a shocking conclusion. THE SCARECROW IS A MUST READ!.– Eileen

It is a very easy to read book with a few red herrings and I really enjoyed it. The characters are easy to like too and it is great to have a bit of the family life of Jason and Erica as well. Would recommend it. – Maureen

An adrenaline pumping book that grabs the reader from the first page and doesn’t let go until the very end.  Just what I expect from Stewart Giles and an addition to the Detective Jason Smith series.

Smith and Whitton have taken in Lucy, the daughter of a friend who was murdered.  Now they are discussing making the situation permanent by adopting her when the phone rings.  As usual it is bad news, someone has died and once again Smith’s life is put on hold as he dedicates his time and effort into tracking down another psychopathic killer.  But this case is a difficult one and as the bodies stack up the team find they still have no clue who this vigilante murderer is.

Smith, in his desperation to move the case forwards, finds himself looking at everyone as though they are a suspect and that could be clouding his judgement.  Could this be the case that beats the brilliant DS Smith?

The characters created for the story bring their own personalities to the book while our old friends continue to develop.  Bridge appears to be growing up, albeit slowly but it is good to see he still maintains the cheeky persona we all love.  Although I don’t like Superintendent Smythe I have to confess I did miss the buffoon and his antics in this story but I am sure he will be back.

Overall another absolutely gripping read and I love the little teasers about Lucy, I am sure she will bring interest to the future books in this series.  I love how the books are getting a little darker as the series progresses bringing more intrigue and suspense to the stories.  Absolutely brilliant read – love it.

The Detective Jason Smith series continues to grow with book 17 now available. In addition, I have a new series featuring an Irish detective who relocated to Guernsey. The first 7 books in the Detective Liam O’Reilly series are now available. There are also 3 stand alone novels.