Today is my turn on the Blog Tour for IMPACT by Sunday Times Bestselling Author: Mark Mills.  I am thrilled to be sharing a 5* review by Lena of this brilliant book. 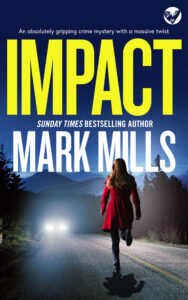 MEET DETECTIVES BODINE AND FULLER IN THE FIRST OF A BRILLIANT NEW CRIME SERIES FROM A #1 BESTELLING AUTHOR.

Florence Winslow wakes up in hospital. The nurse tells her she’s killed a man.

She can’t remember what happened. All she knows is that she was driving down a deserted country road at night when a car hurtled out of nowhere and ploughed into her. She’s lucky to be alive. The other driver was killed on impact.

Something about the accident doesn’t add up.

There are too many unanswered questions. The dead driver was carrying no ID — why? There are no skid marks on the road. And what was Florence doing there in the first place? She tells the police she was visiting her in-laws, but why was she suddenly invited after so many years of estrangement?

As Dylan and his new partner, former FBI investigator Carrie Fuller, dig deeper, they discover that Florence isn’t just anyone. Her father-in-law is one of the wealthiest men in America.

He’s also dying. And with his vast fortune at stake, things are a lot murkier than they seem. At least one member of this over-privileged family is hiding a dangerous secret . . . and will go to any lengths to keep that secret hidden.

DISCOVER A BREATHTAKING NEW SERIES OF CRIME MYSTERIES THAT YOU WON’T WANT TO PUT DOWN.

“A master of the art of murderous storytelling.” The Sunday Times

MEET THE DETECTIVES
Detective Dylan Bodine is newly-promoted, clever, ambitious — and too good-looking for his own good. His tricky relationship with his artist girlfriend Evie looks like it’s on the rocks. This is his first case and he’s determined to prove himself — but he’s prone to making mistakes. He needs the experience and expertise of his new partner, Detective Sergeant Carrie Fuller, to rein him in.

Detective Carrie Fuller is about to turn fifty-five, and looking forward to retirement. This is her last case — and the last thing she needs (or wants) is to mentor a cocky young rookie detective. Blessed with a sharp tongue, a dry wit and a world-weary wisdom, she doesn’t suffer fools gladly — as Dylan is about to find out.

Although the two detectives don’t get off to a great start, early tensions give way to a unique personal chemistry as their very different styles of detection begin to bear fruit.

THE SETTING
The wilds of north-west Connecticut is a land that time forgot. The Litchfield Hills (also known as the Northwest Hills) are a thickly-forested paradise threaded with rivers and scattered with historic towns and remote farmlands. This is ancient New England, uncluttered, unchanged, a place where Nature at her finest still holds sway. It’s also where some of the wealthiest families in America choose to make their home.

THE AUTHOR
Mark Mills is an award-winning author and BAFTA-nominated screenwriter, whose film credits include The Reckoning, an adaptation of Barry Unsworth’s Morality Play. His first novel, The Whaleboat House (originally published in hardback as Amagansett), won the 2004 Crime Writers’ Association’s New Blood Award for the best crime novel by a debut author. His second novel, The Savage Garden, was a Richard & Judy Summer Read and a UK No.1 bestseller. He is the author of seven novels.

IMPACT opens in the midst of a terrifying situation which turns out to have insidious, sinister origins. Harrowing tension is all pervasive as the pages fly by. Riveting chapters are filled with an ominous foreboding. Suspense skyrockets with an action packed race against time and continues into circumstances later ramping up for another thrilling sprint against the clock leading to a dynamite explosive finish you’ll never see coming.

Read this review on Goodreads 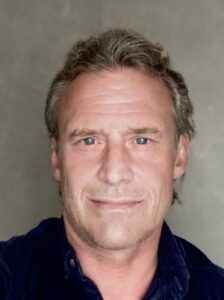 Mark began his career as a screenwriter, before turning to novels. His first book, Amagansett (retitled The Whaleboat House in the UK) – a murder mystery set on Long Island in 1947 – won the British Crime Writers’ Association Debut Dagger, and became a national bestseller in the U.S. His second novel, The Savage Garden, took 1950s Italy as its setting and became a no.1 bestseller in the UK.

Subsequent crime thrillers have included The Information Officer, set on the island of Malta during World War Two (shortlisted for the CWA Historical Dagger), House of the Hanged, a spy thriller based in the south of France in 1935, and Where Dead Men Meet. Mark broke away briefly from the crime genre with a comedy about a rescue dog – Waiting for Doggo – which sold in fifteen territories.