Today I am closing the Blog Tour for HOPE ISLAND by Jackie Elliott with a review spot.  Hope Island is book 3 in the brilliant COFFIN COVE MYSTERIES series and is another stunning read that I really enjoyed. 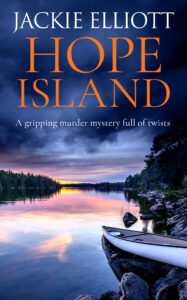 AN ADDICTIVE MUST-READ WHODUNNIT FROM THE NEWEST TALENT IN CRIME FICTION.

Local journalist and sometime sleuth Andi Silvers is on the trail of another mystery.

Andrea “Andi” Silvers is starting to feel like the tiny fishing village of Coffin Cove, on the Vancouver coast, just might be home.

She’s sort of dating Harry and living with his sister, café-owner Hephzibah. Andi’s job at the Gazette is going well.

Just as she starts to feel like things are settling down, Andi is thrown into two investigations at the same time.

Human remains are found on Hope Island, a rocky outcrop just off the coast of Coffin Cove. The discovery halts a new development. The tiny island has just one resident, Joshua Moore, who has lived there in isolation for years.

Meanwhile, a gas station owner is shot dead on the west coast. When Andi goes to cover the story, she is startled to discover her estranged father is back. And he left his business card with Joyce Mayfield, the victim of the shooting.

What’s her father up to this time?

⭐⭐⭐⭐⭐ “I love this series and was gripped from beginning to end.” Barbara

⭐⭐⭐⭐⭐ “A very enjoyable book with a good climactic ending.” Carole

⭐⭐⭐⭐⭐ “What an awesome book! I really enjoyed the story, the characters and how the book kept my attention so much that I couldn’t put it down!” Bobbi

⭐⭐⭐⭐ “With a solid mystery at heart, a credible cast, a beautifully described location and an intriguing storyline this is a worthy addition to the series.” Ruth

⭐⭐⭐⭐ “Good book! This book had suspense, intrigue, mystery, and a good whodunnit! The storyline was interesting and flowed nicely!” Debbie

⭐⭐⭐⭐ “It’s non-stop action with developments at every turn and it had me hooked.” Elaine

This is book 3 in the Coffin Cove Mysteries series but they do work perfectly as stand alone.

Andi Silvers found herself in Coffin Cove when her life and career ended up in tatters.  It was her only choice but although initially it was a chance to regroup now she has found herself regarding it as home.  It isn’t usually a dangerous job working for a newspaper but Andi seems to attract danger.  The last book saw her home becoming a crime scene so she is now living with Hephzibah and  building a relationship with Harry.  Life is good finally she is happily settled but then her estranged father turns up, the remains of a body are found and suddenly life is once again a race against time to track down a killer before anyone else dies.

I love how the characters grow with each book and we learn more about them.  I like the addition of Andi’s father and the secrets that are tantalisingly hidden until the end of the book.  The story is unique and complex with intrigue building all the way through.

A very gripping read and I am looking forward to more in this series.