Today I am sharing my review of MURDER ACROSS THE LINES as part of the Blog Tour.  This is the second book in the Warwick and Bell series by the talented Janice Frost

MURDER ACROSS THE LINES (Warwick & Bell #2) 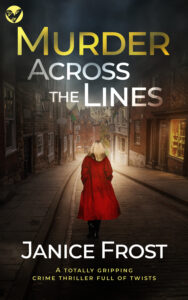 At a busy crossing in Lincoln city centre a motorbike skids to a halt. A man in leathers jumps off the bike and grabs a young girl waiting at the lights.

He pushes her roughly aside, remounts the bike, and roars away.

The girl falls to the ground. She’s been stabbed.

Special Constable Jane Bell witnesses the whole thing. She cradles the dying girl and hears the last word on her lips: the name of a missing local boy, a twelve-year-old called Nate Price.

Now they need to work together to find Nate before he too is executed in broad daylight.

WHAT READERS ARE SAYING ABOUT MURDER ACROSS THE LINES:

“This book has opened my eyes . . . I feel like I have lived in a bubble living in the mountains in a small town.” Chelsea A.

“Well-written, twists and turns aplenty and with a credible cast of characters but with a vicious, intense and emotional storyline.” Ruth G.

“A decent follow-up with the return and growth of several characters.” Donna B.

MEET THE DETECTIVES
SPC Jane Bell is forty-five, a widow of three years following the premature death of her husband, Sam. She has two grown-up children, Patrick and Norah, who are pursuing careers in London. After Sam’s death, Jane makes some changes to her life. She downsizes from their large family home in the country to a cottage in Lincoln.

DI Stephanie Warwick is thirty-five. She left school at eighteen and worked in a bank before joining the police force. She is haunted by her ex-boyfriend, Cal. He attempted to kill her twelve years ago, and murdered her best friend.

This is book 2 in the Warwick and Bell series. It will work as stand alone but I would recommend reading book 1 first to appreciate the relationship between the two women (or lack of one).

DI Steph Warwick is a no nonsense type of police officer but she does have baggage that affects how she thinks and acts at times. She has very little time for Jane Bell who is a Special Constable so not ‘proper police’ However, Jane is a naturally inquisitive person and can’t help looking for answers which usually lands her in trouble with Steph Warwick.

The story begins with Jane Bell going about her day when a young girl she is standing next to is stabbed as Jane tries to stop the bleeding the girl utters one last word: Nate. It is soon clear that Jane has stumbled unknowingly into the middle of a highly complex case involving Police Force teams from up and down the country.

The book moves back and forwards telling the story from the point of view of different characters at different times. Nate is just a young boy dragged away from his friends to live in Lincoln with his alcoholic mother. Alone, hungry and neglected he is a sitting target for the evil people using children to run drugs. When Nate is forced to see the violence and cruelty of the life he has become trapped within he has one plan – to escape as soon as he can.

This is a very fast moving book full to the brim with suspense. Any parent will find it a very emotional read, I certainly did. Children who have lost their childhood, who nobody cares about exploited by gangs.

However, it is a very intriguing read and I kept turning page after page. The ending where we find out who is actually running this gang was a real shock and made for an explosive finish.

An absolutely brilliant read that I highly recommend to anyone who likes Crime Fiction.

5 stars from me. Thank you to Joffe Books and the author for the advance digital copy. This is my unbiased review. 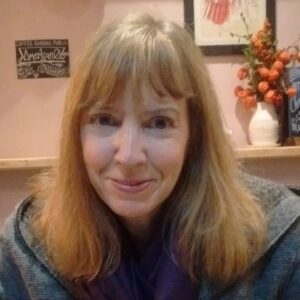 Janice was born and grew up in West Lothian, Scotland. After completing an English degree at St Andrew’s University, she moved to London where she lived for ten years doing an assortment of jobs. Her passions are reading, writing and walking in Scotland and the Lake District. She lives in Lincolnshire with her husband and two sons.

WARWICK & BELL SERIES
MURDER AMONG FRIENDS
MURDER ACROSS THE LINES

STANDALONES
THE WOMAN ON THE CLIFF
FOLLOW JANICE ON