Today I am sharing my review of STALKER ON THE LEVELS by David Hodges as part of the Blog Tour.  This is book 9 in the Detective Kate Hamblin series but works perfectly as stand alone. 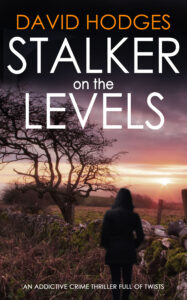 MEET DETECTIVE KATE HAMBLIN IN THIS BESTSELLING SERIES FROM A FORMER POLICE OFFICER.

Famous crime novelist Tamara Callaghan is on her patio late one night when a man appears from the woods.

He’s totally naked — apart from the hood over his head.

Tamara runs back inside and slams the patio door shut behind her. When she looks back, he’s pressed up against the glass.

Then, at a book signing, every copy of Tamara’s new novel is slashed to shreds. It’s clear someone is out to get her.

Detective Kate Hamblin is called in to investigate.

But things take a grisly turn when the flasher is found in an old converted barn nearby. The word ‘SORRY’ is scrawled on the floor beneath him.

Kate is not convinced it’s suicide.

The team might not only be dealing with a stalker on the Levels, but also a murderer . . .

DISCOVER A BREATHTAKING NEW SERIES OF MYSTERIES THAT YOU WON’T WANT TO PUT DOWN.

WHAT READERS ARE SAYING ABOUT THE DETECTIVE KATE HAMBLIN MYSTERY SERIES:

⭐⭐⭐⭐⭐ “You can’t fail to love Kate, the main character. Despite all her shortfalls she always delivers, normally without the credit, which makes her character believable.” Paul

⭐⭐⭐⭐⭐ “Another gripping storyline from David. I like the personal side to the story as well as the crimes. Kate and Hayden seem such an odd couple but they bounce off each other. Well worth reading.” KLW

⭐⭐⭐⭐⭐ “David Hodges has done it again. Hopefully we don’t have to wait too long for the next one.” David

THE DETECTIVES
Kate is a feisty, young police detective, with a dynamic approach to her job. She is plucky and tenacious, but prone to being impetuous and headstrong, which often lands her in tight spots and does not exactly endear her to her crusty boss, DI Ted Roscoe.

In stark contrast to Kate, her detective partner, Hayden, is an overweight, untidy ex-public schoolboy, with a pompous, laidback attitude, which drives her to distraction. But he is also highly intelligent, with a keen, analytical mind and a practical, reasoned approach to everything, which, with a prevailing wind, can sometimes act as a brake on his partner’s more impulsive actions.

THE SETTING
The Somerset Levels covers an area of about 160,000 acres between the Mendips and Quantock Hills, in the County of Somerset. Sparsely populated outside the local towns of Bridgwater, Glastonbury and Street and prone to flooding, it is a haven for wild life, a wild, secret place with an atmospheric brooding stillness, which creeps into the very soul.

THE AUTHOR
David Hodges is a former police superintendent, with thirty years’ service. Since ‘turning to crime’, he has received critical media acclaim, including a welcome accolade from Inspector Morse’s creator, the late great, Colin Dexter, and he is now a prolific novelist with eleven published crime novels and an autobiography on his police career to his credit. His previous police experience has enabled him to provide a gritty realism to his thrillers and his Somerset Murder Series, featuring feisty female detective, Kate, and her partner, Hayden, has gone from strength to strength.

Kate Hamblin has her work cut out with this one.  A bestselling crime writer who finds a flasher in her garden but doesn’t want the Police investigating because she ‘likes her privacy’.  Intrigued?  So is Kate and since this flasher has scared other women Kate is determined to track him down and stop his antics before it escalates.  She has a suspect in her sights but before she can arrest him he is found hanged.  Suicide or murder?  It looks like suicide but all is not as it seems.

And all is not as it seems in the home of Tamara, the bestselling author.  What has she got to hide that is so important she is reluctant to allow the police to investigate her second stalker.

This is a very intriguing story which had me guessing all the way through.  There are a lot of titbits thrown to the reader along the way but not enough to work out what is going on.

As the stalker escalates and anyone who gets in his way find themselves in danger can Kate and her team uncover the secrets and stop the psychopath before he stops them?

Absolutely brilliant , adrenaline pumping story that had me turning page after page all the way to the end.  Another excellent read from one of my favourite authors. 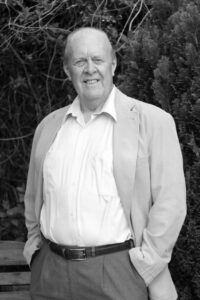 David Hodges served in the Thames Valley Police, from the rank of Constable to Superintendent, retiring after thirty years with the force. During that time, he gained wide experience in numerous operational and management roles, including both urban and rural policing, membership of the tactical Support Group, an authorised firearms and public order unit, and departmental and operational command. Prior to his retirement, he was appointed the force Press, Public Relations Officer and completed his career as the head of Corporate Communication.

A prolific writer, with fourteen crime novels published so far, including nine in his Somerset Murder Series, David is a member of the Society of Authors, the Crime Writers and Crime Readers Associations and International Thriller Writers.

An active supporter of public libraries, and keenly interested in wildlife and the countryside, he is married, with two daughters and four grandchildren, and now lives in beautiful Pembrokeshire, where he can fully indulge his passion for writing.