The Huntsmen, by Tony J Forder, is the first book in a new UK crime series, based in Wiltshire.

The opener introduces the reader to DS Royston Chase and his new partner, DC Claire Laney. Chase is a family man and good at his job, but his lack of filter when speaking (caused by a brain injury sustained on the job) can cause problems. Laney is winding down towards her retirement, is bitter about having risen to the rank of DI only to see herself demoted back down again. She presents as a copper who no longer cares, but we find out otherwise. The two are supported by PCSO Alison May, who is ambitious and keen to join the force as a PC or preferably a DC. 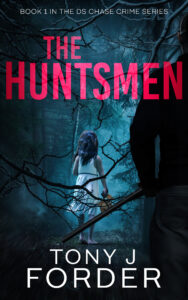 Multiple deaths following a road collision are hard enough to deal with. That the man responsible was the ex-Chief Constable of Wiltshire Police and a Knight of the Realm is worse still for those tasked to investigate the incident. But the real question they have to answer is: who was the now deceased naked female minor alongside him at the time?

DS Royston Chase is living life as an outcast in a small Wiltshire village, and is called to the scene. Paired with the bold and strident DC Claire Laney, Chase is given the task of closing the case quickly and quietly.

But when the minor’s DNA provides a familial link to a girl who vanished from her home twenty years earlier at the age of eight, Chase and Laney refuse to accept the coincidence. The pair start looking harder at the ex-cop’s life, at which point they encounter serious opposition. Perhaps deadly serious.

Because the establishment looks after its own, and soon it’s not only their bosses getting in the way of a thorough investigation. Chase and Laney find themselves seemingly at odds with everyone, fighting to save their own reputations as well as the case. But neither will rest until they identify their young victim, no matter what the cost…

Welcome to Detective Chase a new detective and the first in a new series by Tony Forder.  If you like Tony’s books then you will LOVE this one.

Royston Chase has been transferred to a small station in Little Soley staffed mainly by PCSOs.  He enjoys the peace and quiet and is happily going along with his duties when he is called out to a major RTA.  The site is carnage many vehicles and many lives lost or changed forever and when Chase finds out what has been found among the wreckage he realises his life has also been changed.

A drunk ex Chief Constable is to blame for the accident so it isn’t unexpected that the powers that be want it put to bed and covered up never to be seen again.  A DC is sent to help Chase with the investigation – enter DC Claire Laney a feisty woman who has found herself going down the hierarchy rather than up and isn’t impressed with being banished to the back of beyond so enters Chase’s office determined to make a statement and does just that in spades.

Absolutely love the characters very unusual both compassionate and neither caring about the rule book too much.  An unlikely pairing but as it turns out a very effective one.  If the powers that be thought they could brow beat Chase and Laney into submission they were wrong.

As the investigation progresses it becomes clear that Pandora’s box has been well and truly opened and while others may be on a mission to implement damage limitation Chase and Laney become more determined by the day to find out what has been going on and what a disappearing 8 year old many years ago has to do with it.

Wow what can I say it is a very hard read in places but so much going on I just kept reading ‘one more chapter’ Every page has adrenaline pumping action and the suspense delivers in spades.  Absolutely brilliant read, 5 stars from me.

Tony J Forder is the author of the bestselling DI Bliss crime thriller series. The first seven books, Bad to the Bone, The Scent of Guilt, If Fear Wins, The Reach of Shadows, The Death of Justice, Endless Silent Scream, and Slow Slicing, were joined in December 2020 by a prequel novella, Bliss Uncovered. The series continued with The Autumn Tree in May 2021.

Tony’s other early series – two action-adventure novels featuring Mike Lynch – comprises both Scream Blue Murder and Cold Winter Sun. These books were republished in April 2021, and will be joined in 2022 by The Dark Division.

The Huntsmen, released on 4 October 2021, is the first book in a new crime series, set in Wiltshire. It features DS Royston Chase, DC Claire Laney, and PCSO Alison May.

Tony lives with his wife in Peterborough, UK, and is now a full-time author. He is currently working on the first book of an intended new crime series, whose working title is The Huntsmen.