Today I am sharing a review by Eileen of HELL’S HALF ACRE by Jackie Elliott as part of the Blog Tour.  This is book 2 in the brilliant COFFIN COVE series set in Canada.  Available from Amazon at a special release price of 99p/c for a limited period. 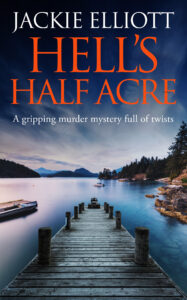 HELL’S HALF ACRE is a riveting, ingenious plot to resolve the unfathomable conundrum of how a connection between the mysterious disappearance of a man 9 months ago, a gruesome, horrifying discovery, a vicious, merciless incident and ghastly, brutal violence of monumental proportions can be reconciled. Heart-racing, action packed, race against time for fear of what diabolical atrocities might be next has the pages flying by until the dynamite finish.