Stewart Giles and I would like to say a massive THANK YOU to all the wonderful bloggers and reviewers who helped with FEAR ON THE ISLAND.  You are all awesome xx

Black Books Blog  Liam is becoming a very good and clever police officer, and is settling in nicely on Guernsey, which makes the story flow better and this series is getting better with more books.

Guest Review FEAR ON THE ISLAND blows up from the start with a shocking, terrifying, mystifying incident. Then a catastrophic tragedy occurs near the station. What perilous, horrifying upheaval is being visited upon this small, island tourist destination? Skyrocketing chilling fear and tension have locals and visitors alike clamoring for answers. Dread apprehension and unprecedented furor become all pervasive building riveting, page flying, unnerving spine-tingling suspense exploding into a disturbing unfathomable finish.

Ginger Book Geek  ‘Fear On The Island’ is superbly written but then I wouldn’t expect anything else from Stewart Giles.  He has a way of grabbing your attention and drawing you into what proves to be a compelling read.  For me, the story started with a bang (quite literally), hit the ground running and maintained a fast pace throughout.

Nicki’s book blog  I love these books. There is a passion amongst the pages along with a smile despite the subject matter which makes it a very enjoyable read. I devour each and every one and only put it down when life (or sleep) gets in the way. Plots that are very well crafted and you really don’t have an inking where it is going (despite how many crime books I read!) which I really enjoy- and then go-”oh yes of course” ( as you do!). A highly recommended series- but be warned- when you start you may not want to stop!

The Word is Out  The characters have already been well introduced in the first two stories and now form a great team working well together under O’Reilly’s experienced command. With lots of little bits of humour peppered throughout the story, including the way O’Reilly sees some of his colleagues, there is a warmth to the storytelling which balances out the grisly bits and makes it a fantastic and highly entertaining read. I am pleased to see things looking up for the detective in his private life and I am looking forward to devouring book four, Malice On The Island, very soon. 5*

Linda Strong Book Reviews  This is fast-paced, action-filled, with twists and turns that rival a roller coaster. The plot is solid, the characters are deftly drawn. Although 3rd in the series, this is easily read as a stand alone. However, I would recommend reading them in order .. they are all well-written and exciting.

Sue Wallace Site  A brilliant read. Great story. I liked Liam. I was surprised with who it was. I liked the ending and hope there is more to come. 5*.

Loopy Laura Fear on the Island was an absolutely gripping read and my only complaint is that it is much too short! The action is fast paced from the opening chapter and the murders happen in quick succession. The events of the whole book take place over only a couple of days.

Turn The Page Blog  Fear on the Island: A compelling mystery with a dark twist.

Beyond the Books  A story that is written perfectly by Stewart Giles, with humour running throughout to balance the darker parts. One of my go-to authors is Stewart Giles and he proves my reasoning time and time again. Another skillfully woven plot that is action-packed and intriguing, creating a book that I sped through in a day. I look forward to the next book already. 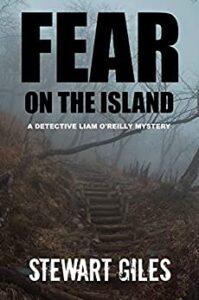 From bestselling author: Stewart Giles comes book 3 in the brilliant Detective Liam O’Reilly series.
It’s mid-summer on the island of Guernsey and Detective Liam O’Reilly is winding down for the day.
He’s enjoying a quiet drink with his daughter when a man in bike leathers walks inside the pub. O’Reilly doesn’t even register him until he hears the gunshot. The man has taken out a gun and shot the barman twice in the face. O’Reilly takes hold of his daughter and throws her to the floor.
“Not everything is as it seems.” Says the gunman as he leaves the people inside the pub with something to think about before he calmly walks out of the pub.

Then another man is shot dead in broad daylight. A figure in leathers tells the witnesses the same thing: “Not everything is as it seems.”

O’Reilly and his team have no idea what is going on. Even the experienced Irish detective really doesn’t have a clue what this is all about.

When the gunman takes a third victim the people on the island start to panic. Fear is rife and confidence in the police is at an all-time low.
O’Reilly knows it’s only a matter of time before this madman strikes again, but he’s running out of ideas. With his team working around the clock and running on empty, he knows time is running out before the most confusing killer he’s ever come across strikes again.
What readers are saying about Fear on the Island
The DI Liam O’Reilly series just keeps getting better and better! Fear on The Island is fast-paced and gripping, drawing you in from the start with an interesting plot and likeable characters that are continuing to develop. If you enjoy detective crime thrillers this is a great read set in Guernsey. Can’t wait for the the next one! – Kirsty
Wow what a fantastic read, Liam is starting to grow on me as a very clever copper, it’s the best so far in this series so let’s bring on more of O’Reilly the hero of Guernsey. – Booklover Bev
Each new Detective Liam O’Reilly book just gets better and better. Fear on the Island is fast paced as our DI is faced with a clever killer seen by everyone but identifiable by no one. In between the investigation details we get glimpses into life on the island of Guernsey and our DI’s restricted personal life. A quick, satisfying read.- Alison
Expertly crafted, gripping and unpredictable. – Carol
Another brilliant read from Stewart Giles – Sue
BOOKS BY STEWART GILES

This is book 3 in the Detective Liam O’Reilly series but they do work well as stand alone. 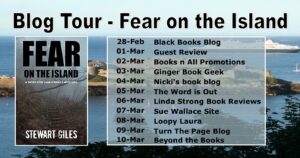 Life is currently quiet on the Island of Guernsey and Liam O’Reilly is enjoying a meal with his daughter when a man in full motorbike gear walks in and shoots the barman.  On leaving the gunman says ‘Everything is not as it seems’ before speeding away on a powerful motorbike.  What does he mean and what is going on?  As the dust settles the investigation begins then there is another murder with the same MO.  Why is someone killing seemingly random men?

There seems to be no link between the victims but the bodies keep stacking up the only link appears to be the Motorbike rallies and a missing young woman but does she have anything to do with the murders?

Could this be the case that beats O’Reilly?

This grumpy Irish detective is really growing on me each book I get to know the characters a little more and each book provides a large helping of intrigue and suspense that is perfect for any reader of Crime Fiction.

As I expect from Stewart Giles the suspense builds all the way to the totally unexpected ending.

Another book full of suspense, intrigue and originality – Brilliant read.

The Detective Jason Smith series continues to grow and there are now 14 books including the introduction: Phobia. In addition I have an new series featuring an Irish detective who relocated to Guernsey.  The first 3 books in the Detective Liam O’Reilly series are now available with book 4: Malice on the Island scheduled for publication at the end of April.