#NewRelease – today is the publication day for the latest addition to the Detective Jason Smith series by Stewart Giles.  You can buy this unputdownable book for just 77p/99c on Amazon. 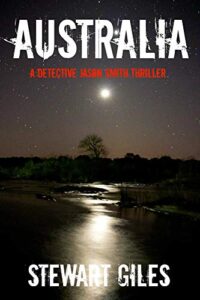 Australia :DS Jason Smith Book 14
From #1 bestselling author: Stewart Giles comes another brilliant addition to the Detective Jason Smith series
Detective Jason Smith is sick and tired of the English weather. It’s February in York and the dark, dreary days are getting him down.
When his wife, DC Erica Whitton wins a holiday to Australia, Smith is reluctant to go. He has no desire to go back home. Against his better judgement, Smith agrees to show his wife and daughter where he grew up.
The perfect holiday soon turns into a nightmare as Smith finds himself in a race against time to save the only people he’s ever cared about.
Children in Smith’s home town are being murdered. There’s something rotten there, an evil Smith has never come across before, and the local police are not what they appear to be.
When his wife is attacked and his daughter is taken, Smith realises he’s on his own. With the clock ticking, and not knowing if his daughter is alive or dead, Smith comes face to face with the worst kind of evil he’s ever encountered.

What readers are saying about Australia
Wow this book kept me well and truly on the edge of my seat, gripping, horrifying, cringes, gave me a lump in my throat, every emotion went down on me, fantastic writing from this author I can never fault him I highly recommend it to all fans out there to read this man’s work totally brilliant’ – Booklover Bev
AUSTRALIA quickly demonstrates true evil with a heinous, horrific, abhorrent incident. Following this, in an idyllic setting, the unthinkable happens. Relentless heart-pounding agonizing suspense will hold you spellbound from start to finish. You will not be able to put it down. The pages will fly by while your heart races on every one. This is a mesmerizing, one sitting, book.‘ – Eileen
I enjoyed treating about Smith’s adventures in Australia, as always fast paced with sharp, witty dialogue. A family holiday takes a sudden and shocking unexpected twist and becomes a personal crusade as Smith does what he does best and has to battle to piece together what has happened. Well written and believable as we follow Smith’s journey and how he overcomes the various obstacles in his way. Fast paced, enjoyable crime thriller set in Australia in contrast to York – Kirsty
One heck of a thriller – a real page turner.The best Smith story to date!-Carol
BOOKS BY STEWART GILES

The Detective Jason Smith series continues to grow and there are now 14 books including the introduction: Phobia.