THE PERFECT LIFE by Susanna Beard 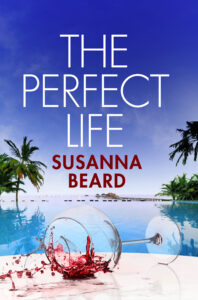 DISCOVER A TOTALLY COMPELLING PSYCHOLOGICAL THRILLER WITH AN ELECTRIFYING FINISH

The woman who has it all

Heather has lucked out. She has a beautiful house, a happy marriage to James Jessop, with two sons, Ben and Harry — and she’s just won the lottery. £29 million!

Natalie has never quite kept up, but she’s finally in a relationship with a new boyfriend, Nick. She’s been best friends with Heather since they were bullied at school. But will her friend’s new fortune change their relationship?

A dream come true turns into a paranoid nightmare

The Jessops comfortable life dissolves into chaos. Heather starts getting anonymous, hateful messages on her phone. She begs Natalie to escape with her to Spain, along with a few other close friends. But away from the limelight in London, things go from bad to worse. Then the worst happens and Heather realises she can’t trust anyone. Not even her best friend.

Nothing will ever be the same again

Charged with menace, this unputdownable, edgy story of jealousy and suspicion by critically acclaimed author Susanna Beard reimagines the depths of the psychological thriller.

WHAT READERS ARE SAYING ABOUT SUSANNA BEARD:

“This novel bears all the hallmarks of a great thriller. It not only deals with huge issues like greed, guilt, evil and revenge, but with Anna’s deeply personal search for justice, reconciliation, forgiveness and trust. Her journey takes her to the very limits of herself but, at its heart, [this] is also a story about love in its best forms and I defy anyone not to get swept up in it.” Claire Dyer

“It is taut and tense and builds to an electrifying conclusion.” Kirsten Hesketh

“I enjoyed Susanna’s emotive and thought-provoking novel — I thought it was an engrossing mystery and loved the Lithuanian setting. She dealt with some dark themes and created great three-dimensional characters, especially Anna, who was complex and engaging. I wanted to go along with her in her journey for finding the truth.” Sam Carrington

Heather is carrying on with her normal life and pops to the shop to get some food and while she is there she buys a lottery ticket on a whim.  When she realises she has the rollover jackpot winning numbers it slowly sinks in that her ‘normal’ life is over.

Attempts to keep the news to the people who need to know are unsuccessful and then Heather starts getting hateful text messages.  Forced to move out of their home the family settle down to try and work out what their new life will look like.

This is an interesting story detailing a realistic struggle to deal with the change brought about by suddenly becoming multi-millionaires and the realisation that life as they knew it will never return.  In addition they have to cope with jealousy and the other human traits that a large amount of money brings to the forefront.

Despite enjoying the writer’s life, Susanna has an adventurous streak – she has swum with whale sharks in Australia, trekked in the mountains

of Nepal and fallen down a crevasse in the French Alps.

Her favourite quote is from Winnie-the-Pooh: “Stories make your heart grow.” Apart from books, her passions include wildlife, dogs and tennis. She aims to keep writing, and never to get old.