Happy Publication day to Stewart Giles.  Today is the launch of LIES ON THE ISLAND the second book featuring the unique Irish detective: Liam O’Reilly.  This is a brilliant series set on Guernsey. 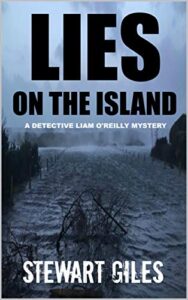 Lies on the Island: A Detective Liam O’Reilly mystery.
From bestselling author: Stewart Giles comes the second book in the brilliant Detective Liam O’Reilly series.
Detective Liam O’Reilly is bored. Life on the peaceful island of Guernsey is quiet, but it’s too quiet for his liking. In the middle of an insurance fraud investigation he confides in his daughter and tells her he’d give anything for a juicy murder case to sink his teeth into.
‘Be careful what you wish for, Dad.”
Her words are still fresh in his mind when O’Reilly stumbles upon two dead bodies while investigating a fire at a container depot. The bodies have been burned beyond recognition and nobody seems to know how they ended up inside the container.
Soon it becomes very clear that something sinister is happening on the sleepy island and O’Reilly is thrown into the depths of lies and deception as he delves deeper into the lives of one particular family.
Everywhere he turns, he’s met with lies but O’Reilly is determined to find out the truth behind these gruesome murders even if by uncovering the lies means he’s putting his own life on the line.

What readers are saying about Lies on the Island
‘A great read and look forward to more from Liam and Assumpta in the future.’ – Diane
‘I loved this book it’s so good and gives you the run around of who is the killer right till the end.’ – Booklover Bev
‘The baffling mystery deepens as the serpentine plot travels through a maze of endless twists and turns and riveting, heart stopping suspense. Arriving at the answer to this mind-boggling conundrum would be nothing short of genius.’ – Eileen
‘The second instalment in the Liam O’Reilly series is even more gripping and fast-paced with interesting characters that are continuing to develop. The storyline is well thought out and pulls you in making it very hard to put down! Definitely recommend this series if you like crime thrillers’ –Kirsty
‘As always, absolutely loved it and I didn’t guess the ending! Stewart: I don’t know how you do it, consistently writing to the same high standard. Your stories never disappoint.’ – Carol
BOOKS BY STEWART GILES

Liam O’Reilly is back so I settled down for another good read from the brilliant Stewart Giles.

Liam has moved to Guernsey from Ireland and persuaded his daughter to move there to be with him but he hadn’t reckoned on a stray cat sharing their new home. The love/hate relationship with the cat brings a humour and realism to the story.

Life is pretty slow after the last case and O’Reilly is wishing for something to happen.  Be careful what you wish for…..  Soon the bodies are stacking up and O’Reilly’s team is struggling to find suspects and clues.

A container is burned and 2 bodies are found among the charred remains who are they?  What were they doing in the container?  These are just the beginning of a list of questions requiring answers.

As secrets are uncovered the team is still struggling to find a motive and suspect and people are still dying.  Will this case beat O’reilly?

This is a brilliant story full of twists and turns and an ending I wasn’t expecting.

The characters continue to develop into complex but very human personalities and they fit perfectly with the story.

A very gripping read, well worth the 5 stars