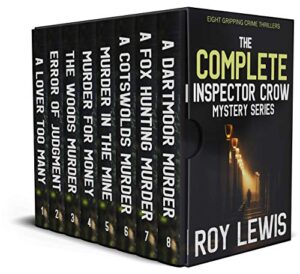 GET THE COMPLETE BEST-SELLING SERIES IN THIS BRILLIANT BOX SET. YOU GET *EIGHT* CLASSIC MYSTERIES FULL OF CLEVER TWISTS AND BREATH-TAKING SUSPENSE.

PRAISE FOR THE INSPECTOR CROW MYSTERIES

“Exciting and individual. Lewis is a master craftsman.” Literary Review

“Each Lewis seems to better the last.” The Times

“Builds up to a good climax and keeps you reading.” Observer

“If you’ve never had the pleasure of reading a Roy Lewis mystery, you are in for a huge treat. Do yourself a favour and pick one up . . . you will find no one better.” Barbara Bernstein

IN THIS EIGHT-BOOK BOX SET:

BOOK 1: A LOVER TOO MANY
Peter Marlin’s wife is found strangled and he becomes the prime suspect. She’d only just returned from an unexplained absence of months. Peter had already taken a new lover, but there’s no real proof he killed his wife. Can Inspector John Crow solve the case before anyone else dies?

BOOK 2: ERROR OF JUDGMENT
A young woman is found dead in college amid a student protest. It turns out she was the principal’s secretary and there was more to her than meets the eye. Who wanted her dead and why? And what does it have to do with the student revolt led by a charismatic firebrand from Iraq?

BOOK 3: THE WOODS MURDER
Schoolgirl Jenny Carson is brutally murdered in Kenton Wood. Then Charles Lendon is found skewered through the heart. He was a ruthless lawyer and a shameless womaniser. Jenny’s father blames him for her murder.

BOOK 4: MURDER FOR MONEY
Gossip-mongering journalist Charlie Rutland is found brutally slain. In his line of work, he wasn’t short of enemies. DI Crow must interrogate a long list of suspects, from a homeless Yorkshireman to an ex-Gestapo officer. Then British spy services get involved. Can Crow crack the case before it’s taken out of his hands?

BOOK 5: MURDER IN THE MINE
A hunt for a missing dog leads to a gruesome discovery down a Welsh mineshaft. Not just the injured dog, but a valuable piece of jewellery and the decaying corpse of a woman. A surprising confession follows. But Inspector Crow is not convinced he has his man. Can he uncover the true killer, despite the many perplexing questions surrounding the case?

BOOK 6: A COTSWOLDS MURDER
Caravan park manager Chuck Lindop is found with his head caved in. The locals insist he was a lovable rogue. So who wanted him dead and why? As the investigation wears on, Inspector Crow uncovers shady dealings at the caravan park. Could Chuck himself have been involved?

BOOK 7: A FOX HUNTING MURDER
One crisp autumn morning, the hunt is in full swing. But instead of a fox, they find their notorious opponent: dead in a bush. Inspector Crow uncovers a side to the victim that no one has seen before. But can he trust his instincts in a case where nothing is what it seems?

BOOK 8: A DARTMOOR MURDER
Fred Norman is found dead in a pond near the mine where he worked. DI Crow is called in to investigate and finds a community divided. Many local activists oppose the mine. Suspicion soon falls on their womanizing leader, but Crow is aware that are many false trails and too many lies. Then he learns a secret about the victim that changes everything.

Don’t miss out on this acclaimed series of unputdownable mysteries from a time before smart phones and DNA testing! YOU GET ALL EIGHT OF THE ABOVE BOOKS IN THIS EDITION.