Today I am thrilled to be sharing my review of MOTIVE by Stewart Giles.  This a new addition to the Detective Jason Smith series and as I expect from Stewart a fast paced, adrenaline pumping read that had me on the edge of my seat all the way to the end. 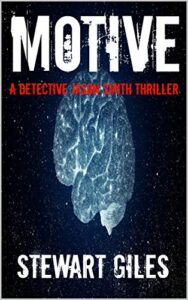 In the week before Christmas, two people are brutally murdered in their homes. There is no sign of a struggle and both victims have had their throats slashed open.

Detective Jason Smith is on holiday for the Christmas period, but he finds himself in the middle of the investigation before he knows it.

There are no clues left at the murder scenes besides a bizarre series of numbers and letters left in random places – E.6.T.0.M. Smith and the team are baffled. What is the relevance of this ambiguous message?

As the bodies start to pile up, and the tensions heat up within the team, Smith soon senses that someone in his team knows more about this than they are letting on. Is there a rat in their midst? And if so, who is it? And why is someone killing people without any obvious motive? In the most bizarre case of Smith’s career, will this be the murderer that finally beats him?

Another great DS Smith book you can rely on a riveting read packed full of twists and turns when you pick up a Stewart Giles book and they just get better and better.

I have really enjoyed watching Smith grow up and cope with the many challenges thrown in his way.  Along with the rest of the team these very ‘human’ characters have developed over the course of the series and now make a very effective team.  Smith always seems to avoid promotion to DI but he still seems to be the one ‘in charge’ which makes the stories a lot more interesting than your usual Police Procedural.

As I expect from this author there are plenty of dead bodies but with every team member working flat out they fail to find a link between the victims.  What is the motive for these killings?  Is there one?

An awesome read domestic intertwined with adrenaline pumping thrills keeps the pages turning and the ending ….  Well that not only had my heart racing but also grabbing for the tissues.  Absolutely brilliant this author gets better and better.

WHAT READERS ARE SAYING ABOUT MOTIVE:

‘Firstly I just want to say, Motive is one of this author’s best books so far, it’s got so much action and twist’s going on, I doubt this author will never ever bore me, Is there more on the way? I hope so.’ – Booklover Bev

‘I was so pleased to get stuck into another DS Smith story that I read this in one sitting!’ – Alison

‘An awesome read domestic intertwined with adrenaline pumping thrills keeps the pages turning and the ending …. Well that not only had my heart racing but also grabbing for the tissues.’ – I Love Books

Miranda is something totally different. A  psychological thriller trilogy, it is a real departure from anything else I’ve written before.

The Detective Jason Smith series continues to grow and there are now 14 books including the introduction: Phobia.