It has been a long wait but well worth it and THE PATIENT MAN is now available.  This is book 6 in the brilliant Jackman and Evans series by bestselling Joy Ellis published by the awesome Joffe Books.  I am thrilled to share my 5* review of this book. 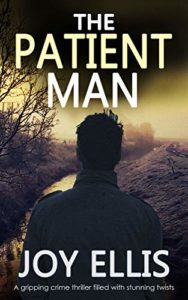 JACKMAN AND EVANS’ MOST DANGEROUS ENEMY IS BACK TO FINISH THINGS OFF
The domestic bliss of Detective Inspector Rowan Jackman of Fenland Constabulary doesn’t last long. His nemesis, serial killer Alistair Ashcroft, is back in town and ready to tidy up unfinished business.

EVERYONE JACKMAN CARES ABOUT IS IN DANGER
Alongside the hunt for Ashcroft, normal police work must continue. The separate thefts of guns, six pigs, a thoroughbred stallion and some oil lead Jackman’s crew to the notorious Lorimer family, ruled over on their farm by the fearsome matriarch Rachel.

Meanwhile, a seemingly routine break-in at the home of gun-club owner Kenneth Harcourt quickly becomes more complicated when the man long held responsible for having killed Harcourt’s young daughter in a hit-and-run is shot dead in a carpark — by a sniper.

A killer is on the loose in the quiet streets of Saltern-le-Fen and he isn’t going to stop at claiming one life. But why is he focusing on young Kevin, so close to promotion to detective?

A LETHAL GAME WITH A VERY PATIENT MAN

And the sniper, like Ashcroft, takes to taunting the police: they’ll never catch him, they need to respect him, they shouldn’t be side-tracked looking for their old adversary.

In a stunning conclusion, Jackman and Evans race against time to catch the sniper and track down their deadly adversary.

Full of twists and turns, this is a crime thriller that will keep you turning the pages until the shocking ending. Set in the atmospheric Lincolnshire Fens whose towns and isolated villages hide many dark secrets.

CAN THEY FINALLY STOP ALISTAIR ASHCROFT?

What readers are saying about Joy Ellis

“Another breathtaking thriller from Joy.” Carole

“A hugely compelling police procedural, with twists and turns that raise tension and suspense.” Paromjit

“All the twists and turns kept me reading.” Viv

THE DETECTIVES
DI Jackman leads the investigation. He is extremely smart and has a knack for bringing out the best in his diverse team. DS Marie Evans is haunted by the loss of her husband in a motorbike accident. She is fiercely loyal to her friends and colleagues.

This book gives the reader an adrenaline boost at the very beginning and it doesn’t let up I devoured every page making myself take my time reading to really savour the story.

Alistair Ashcroft first appeared in The Guilty Ones and so I have been waiting for him to make a reappearance and I wasn’t disappointed.  He is evilness personified and all Jackmans team were affected by his actions but Marie and Jackman have not only been injured but have also had loved ones taken away from them by him. The team was devastated when he escaped capture and now he is back!!

So with a sniper on the loose and an innocent family caught up in the mayhem will Jackman and his team crack the case and bring down Ashcroft or will he escape again leaving devastation behind him?  You will have to read the book to find out.

An absolutely gripping pageturner full of twists and turns.  5 golden stars from me 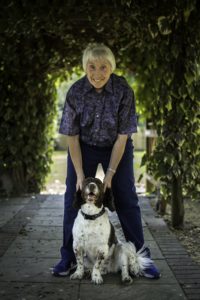 UK #1 BEST SELLER WITH THEIR LOST DAUGHTERS, DARKNESS ON THE FENS, THE FOURTH FRIEND, BEWARE THE PAST, FIRE ON THE FENS, AND THE GUILTY ONES

“I was born in Kent but spent most of my working life in London and Surrey. I was an apprentice florist to Constance Spry Ltd, a prestigious Mayfair shop that throughout the sixties and seventies teemed with both royalty and ‘real’ celebrities. What an eye-opener for a working-class kid from the Garden of England! I swore then, probably whilst I was scrubbing the floor or making the tea, that I would have a shop of my own one day. It took until the early eighties, but I did it. Sadly the recession wiped us out, and I embarked on a series of weird and wonderful jobs; the last one being a bookshop manager. Surrounded by books all day, getting to order whatever you liked, and being paid for it! Oh bliss!

And now I live in a village in the Lincolnshire Fens with my partner, Jacqueline, a highly decorated retired police officer, and our four barking mad Springer spaniels. If I do get any spare time, which is rare these days, my one relaxation is painting, especially using soft pastels. We have been here for twenty years now and although I’ll never be a true ‘Yeller Belly’, a native born to this county, I have adopted it as my own. I love the mists, the big skies and the endless waterways. All my books are set here on the Fens, and why not? The location is perfect for murder!”

BEWARE THE PAST
FIVE BLOODY HEARTS